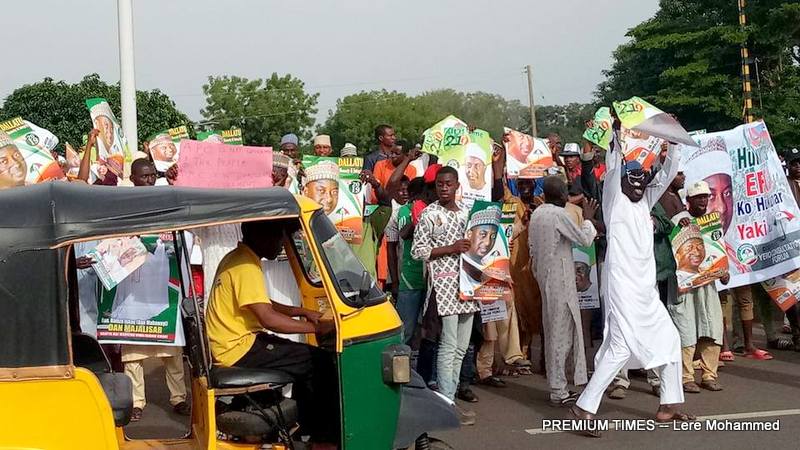 Supporters of a former governor of Kaduna State, Ramalan Yero, on Wednesday besieged the Federal High Court, Kaduna, to protest his arraignment for alleged money laundering and corruption by the Economic and Financial Crimes Commission (EFCC).

Mr Yero and three others were remanded in prison for six days after they were docked by the anti-graft agency in Kaduna on May 31.

They were accused of laundering over N700 million allegedly received in the build up to the 2015 elections.

The judge, Mohammed Shuaibu, said the accused persons should be remanded till Wednesday.

The three other accused persons are a former minister, Nuhu Wya; a former secretary to the state government, Hamza Danma’awuyi; and a former Peoples Democratic Party chairman in the state, Abubakar Haruna.

All the accused pleaded not guilty to the four-count charge levelled against them.

Thousands of supporters carrying banners and posters chanted praises of the former governor as they blocked major roads leading to the high court.

Some of the supporters also observed two Raka’at voluntary prayers in front of the court.

According to one of the supporters, Umar Mohammed, Kaduna people are tired of the humiliation and the attack on the opposition by the present government.

“I am an APC member but what they are doing in the country is not fair. Are they going to tell us that they are saints? They are all PDP decampees, what are they talking about?

Why I poured hot water on my man – Woman