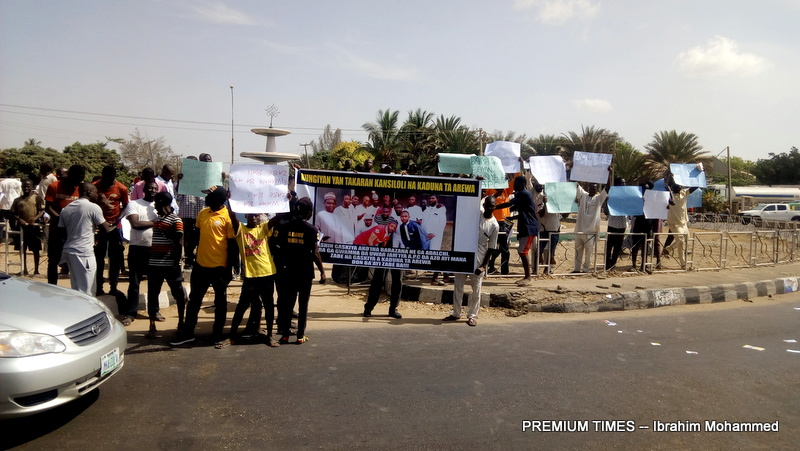 Some councillorship aspirants in the All Progressives Congress (APC) on Wednesday staged a peaceful protest in Kaduna over alleged manipulation of the party’s local government primary elections in the state.

Alleging that the primary elections held on March 29 were marred by irregularities, the protesters took over Lord Lugard roundabout, a stone th‎row from the APC state secretariat, waving placards with inscriptions such as “Injustice is a crime against humanity”, “We have worked well for our great party APC so we need justice”, “Correct the fraud in APC Primary Elections”, “We all know elections were not conducted,” and “We need internal democracy in Kaduna APC.”

Addressing journalists at the venue of the protest, chairman of the Congress for Councillorship Aspirants, Kaduna North Local Government, Aminu Adam, said the aggrieved aspirants had sent petitions to Governor Nasir El-Rufai and the party’s state executive committee on their grievances.

‎He said the state government’s statement that it was neutral made many aspirants to present themselves for the elections, which they expected to be devoid of interference from government officials.

Mr Adam said contrary to the guarantee of neutrality given by Mr El-Rufai, some top government officials interfered with the processes of the elections.
‎
“The interference was so widespread and glaring as not to allow the elections to hold in nine of the 12 wards that make up Kaduna North Local Government Area,” he stated.
‎

“The silence of the state government and all relevant authorities bordering on complicity is what informed our civil protest today, as part of our resolve to press for the conclusive resolution of the matter which potentially threatens the cohesion of the party.”‘

‎
Mr Adam said unless the matter was judiciously handled, the party stands the risk of suffering electoral losses in the state in view of the growing public discontent with the alleged deliberate disruption of the polls in the affected wards.‎
‎

He said their petitions articulated the alleged irregularities, which included non-availability of voting materials such as ballot boxes and comprehensive register of party members.

He called on the governor and party leaders in the state to take steps to urgently address the issue in line with the party’s internal principles.

‎
When contacted on the development, the state’s APC Acting Secretary, Yahaya Pate, said as far as the party is concerned the primaries were free and fair in all the 23 local government area of the state.