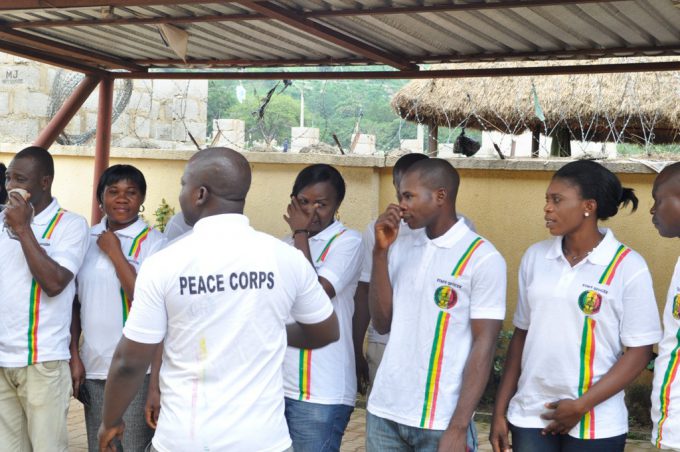 More than 7,363 personnel of the Peace Corps of Nigeria, PCN, in Kano and Kaduna states have been affected by the recent clamp down on the corps operations by the police.

The News Agency of Nigeria reports that 3,000 personnel were recruited in Kano State, while 4,363 were engaged in Kaduna State.

In Kano State, the government had facilitated the recruitment and training of 2,000 youth into the peace corps.

The Deputy Commander of the PCN in Kano, Khadija Muhammed, said that the 2,000 were part of the 6,000 the corps intended to recruit in the state.

“The state government has sent in 2,000 youth to be recruited and it has already paid the sum of N83 million for their application forms and training,” Mr. Muhammed said.

The deputy commandant said that the corps had so far recruited about 3,000 youth who were about to commence training on March 6, before the police arrested the Commander-General of the corps.

She commended the Kano State Government for its support to the corps, which also included provision of free office space and accommodation for its top ranking officers.

In spite of the police action, many youth were seen submitting application letters seeking for the refund of their registration fees.

One of the applicants, Bashir Lawan, said recent issues affecting the corps had cast doubt on the legality of the corps operations.

Meanwhile, the Kano State Police Command has ordered the immediate closure of the state headquarters of the PCN in the state.

The Command’s Public Relations Officer, Magaji Majiya, said that the order was issued by the Commissioner of Police, Rabi’u Yusuf, during a meeting with senior police officers of the command.

“We will continue to monitor their activities even after the sealing of the office to make sure that they are not recruiting youths into the agency,” Mr. Majiya said.

A cross section of Kano residents urged the Federal Government to check the excesses of those operating illegal security organisations in the country.

One of them, Garba Abubakar, said regulating the activities of such agencies was necessary in view of the security challenges facing the country.

“Regulating the activities of PCN is necessary following the recent developments in some parts of the country so as to ensure sanity in the system,” Mr. Abubakar said.

Another resident, Faruk Rabi’u, stressed the need for the security agencies to rise up to their responsibilities by ensuring that all security outfits operated legally.

In Kaduna State, the Peace Corps office remained operational and its commandant said they had recruited 4, 363 personnel.

The Commandant, Sunday Baye, said in Kaduna that the personnel comprised 3,303 males and 1, 060 females.

“We use the NYSC camp to train our personnel, and during the training period we organise lectures for our personnel with Road Safety officials, Police, Fire Service, Civil Defence and NDLEA as our guest lecturers.

“We don’t extort money from anybody, we only charge money for the following which are not compulsory:

“We work with security operatives in the state lawfully,” Mr. Baye said.

In Katsina State, the corps had shut down its state office located near Liyafa Palace Hotel in the state capital while the corps members had disappeared.

Residents close to the area told NAN that the office was closed down after the police raided the corps national headquarters in Abuja.

NAN gathered that those already recruited used to gather every morning at the office for briefing.

The Commissioner of Police in the state, Usman Abdullahi, said through the command’s spokesman, Gambo Isah, that the corps operations remained illegal until there was an Act establishing it.

However, some residents of the state expressed concern over the measure taken against the corps.

He advised members of the corps to stop further activities until the bill establishing the organisation was signed into law.

The News Agency of Nigeria reports that the police had on February 28 arrested the National Commandant of the Corps, Dickson Akor, and 46 members of the corps in Abuja to stop the activities of the group.

Presenting the members of the corps to journalists in Abuja, the force spokesman, Jimoh Moshood, said the operation was aimed at halting and riding the country of illegal and unlawful security outfits.

“The peace corps has unlawfully turned itself into a security outfit without the authorisation and establishment by the Federal government,” he said.

He further said that the corps, under the leadership of Mr. Akor, was registered as a Non-Governmental Organisation (NGO), but that it was operating with disregard to the country’s law.

The Force spokesman said that during preliminary investigation it was discovered that the personnel of the corps were extorting money from unsuspecting youth in the county.

The Senate had passed the bill seeking to legalise the corps and it is awaiting the assent of President Muhammadu Buhari.