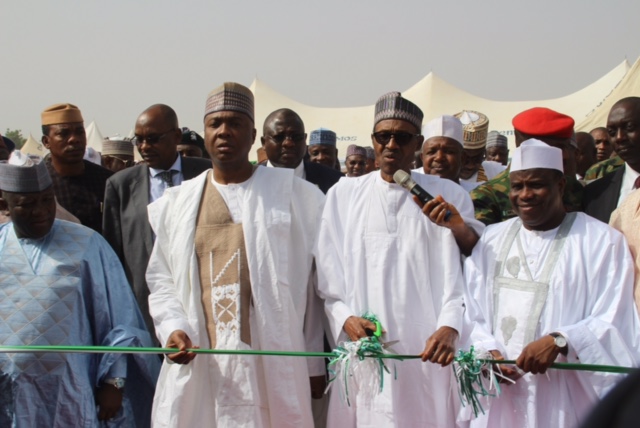 President Muhammadu Buhari on Saturday in Sokoto inaugurated 500 Kalambaina Housing Units, and urged all patriotic citizens to continue to work for peace, religious harmony and sustainable development of the country.

Speaking at the event, Mr. Buhari said that all tiers of government had the sacred responsibility of addressing the welfare of the governed in all possible ways.

According to him, provision of shelter to the teeming populace is a priority for a purposeful leadership.

The president, therefore, saluted the efforts of Gov. Aminu Tambuwal and all those assisting him in promoting democracy and good governance.

“This ceremony is quite historic not only because it is the first of its kind to be held in Sokoto, the Seat of the Caliphate by the present administration, but also for the fact that it is taking place while we are in a festive mood – celebrating the 10th Anniversary of His Eminence, the Sultan of Sokoto, Alh. Muhammadu Sa’ad Abubakar III,’’ he said.

He also commended the governor for “fulfilling his pledges to the people of Sokoto State.

“It is also pleasing to note that the 500 Housing Units being commissioned today are equipped with basic amenities required for a decent life.’’

Mr. Buhari expressed the hope that beneficiaries of the housing project would make good use of the facilities to ensure the accomplishment of the objectives for which the huge expenditures were incurred.

On the recession, Mr. Buhari said his administration was determined to overcome the challenges, fight corruption and ensure good governance for the benefit of all citizens.

The president noted with delight the critical roles being played by the nation’s traditional institutions towards the overall development of the country.

“The Sultan has consistently proved himself worthy of his ancestors.

“He has continuously worked to promote peace and unity in the country.

“He has remained a leader, treading the path of his revered ancestors in building bridges of understanding amongst diverse ethnic and religious groups in the country.

“It is our prayer that Allah (SWT) will continue to bless the Sultan, extend his reign and enrich us with more leaders of his exemplary standing,’’ he added.