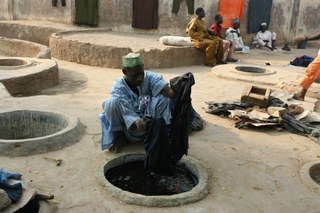 The Kano dyers’ association, popularly known as Masu Rini Progressive Association (MARIPA) has signed a memorandum of understanding with the Chinese traders on the protection of their century-old handcraft.

The local dyers and Chinese traders have been on collision course over the “invasion” of their trade by the later, a situation that led to a series of protest by the over 30,000 dyers in the state.

But a statement by the secretary general of the association, Yakubu Ishaq, said the Chinese traders in the state have agreed to stop imitating the local dyers’ products in order not to make the local products less attractive to buyers.

“Henceforth, the Chinese will no longer under whatever guise import imitated products of the Kano dyers,” said the statement.

Mr. Ishaq said the MOU, which was signed at the office of the state commissioner for Commerce, Trade and Investment, Rabiu Bako, will help preserve a trade the city of Kano prides itself on centuries ago.

With this development, the secretary general said normalcy and progress of both parties ​wa​s in sight.

We won’t accept Dankwambo in our party – Gombe APC chairman