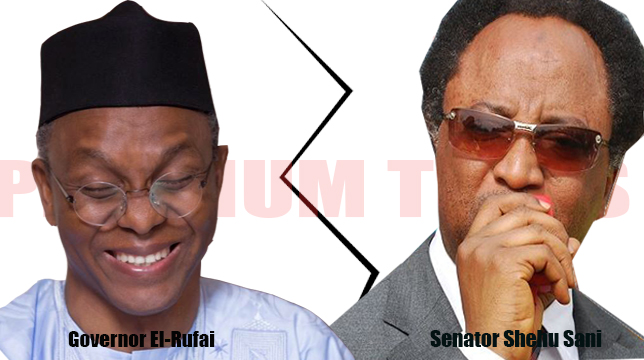 In what appears to be an early tiff in the political arena of Kaduna State, Shehu Sani, the senator representing Kaduna Central Senatorial District, has said he will call Governor Nasir El-Rufai to order if he doesn’t deliver on the promises made during the gubernatorial campaign.

In an interview with Tribune, Mr. Sani accused the governor of introducing unpopular policies and also running a government that does not consider the interest of the people of the state.

Mr. Sani said while he never intended to be in discord with the present Kaduna administration, Governor El-Rufai’s policies are harsh, inconsiderate and anti-people.

“He is a technocrat, while I’m an activist and a revolutionary. So, my power base is the common people the masses who constitute my strength. They are the people I have lived with and fought for over the years. The way the governor is running the affairs of government in Kaduna State is the one which, if care is not taken, we will all sink.

“He has to take consideration of the fact that he met people that were impoverished, that were muscled, harassed and demoralized by the government of the PDP. So, first of all, they don’t need harsh policies that will further impoverish and alienate them. We need to carry them along, taking cognisance of the situation which we find them in. I fundamentally differ with him on that issue. For that reason, he has decided on his own not to even appoint people who identify with me in anyway and who are also seen to be from my camp.

The Senator said Mr. El-Rufai is ignorant of the needs of Kaduna residents and is in the process of plunging the state into ruins.

“Kaduna is a place I have I lived all my life and since I came out of prison in 1998, I have never been out of Kaduna for more than two weeks and I’ve never been appointed to any public office which I will live in Abuja and not know what is happening in Kaduna. So, I can tell you that within Kaduna North, Kaduna South and metropolis of Kaduna, there is hardly any street that I don’t know anybody.

“He is running the state in such a way that he will end up ruining all of us, which I will not be part of. He has taken some steps which have only attracted anger from the general public against him.

In what appeared to be an ego duel, Mr. Sani said he and governor have similar statuses.

“He is a governor, I’m also a Senator. He is not bigger than me, neither am I bigger than him.

“So, as far as I’m concerned, whether El-Rufai is a governor or whatever, anything which he does that does not tally with what is supposed to be done, I will certainly tell him,” Mr. Sani said

Mr. Sani objected to the recent ban of street begging announced by Mr. El-Rufai in July.

In a radio interview in Kaduna immediately after the ban, the senator said the ban was unnecessary.

But Mr. El-Rufai insisted that the ban will not be reversed saying it is in line with planned agenda for the state.

Sourcing players for the Supers Eagles from the Diaspora