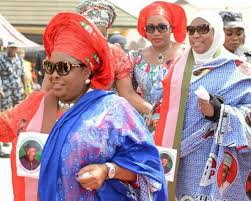 The wife of President Goodluck Jonathan, Patience, was on Wednesday, absent at the North-West Peoples Democratic Party women rally held in Kaduna.

There were insinuations that the First Lady did not attend for fear of attack by hoodlums who might want to revenge her criticisms of Muhammadu Buhari, and Tuesday’s reported attack on the convoy of Mr. Buhari’s wife in Kwara.

Mr. Buhari is the presidential candidate of the opposition All Progressives Congress, APC. The First Lady has repeatedly attacked the former military ruler, at one time, saying he is “brain dead”.

The wife of the Vice President, Amina Sambo, told the crowd of PDP supporters at the venue that Mrs. Jonathan could not make it to Kaduna due to other important national assignment.

The First Lady, in her speech delivered by Mrs. Sambo, told Nigerians that her husband who is seeking re-election has performed creditably to guarantee him a fresh term.

She said President Jonathan has given women priority in all sectors and have continued to accord them their rightful places even in federal appointments.

The first lady also said that President Jonathan’s administration has provided various empowerment to the women across the country, adding that it was time for the women to reciprocate such gesture by voting him and all the candidates of the PDP in the forthcoming elections.

“Women, as the mother of the nation, please come out en masse and vote for President Jonathan for continuity and consolidation. I urge you to also vote for Governor Mukhtar Ramalan Yero and all the other PDP candidates,” Mrs. Jonathan said.

“He has placed us in our rightful positions ‎ and has promised to do more, so, I appeal to you to collect your Permanent Voters Card (PVCs) and vote for the PDP all through the elections.”

Earlier in his address, the Kaduna State Governor, ‎Mukhtar Yero, told the gathering that only the PDP can take Nigeria to the promised land. He said Kaduna state will always be a PDP state.

Mr. Yero said that about 40 per cent of women in the state will be benefit from the SMEDAN ‎project which will soon to be launched in the state.

In her welcome address, the Kaduna State Governor’s wife, Fatima Yero, said women in Kaduna State were adequately sensitized and ready to vote for the PDP in the elections.