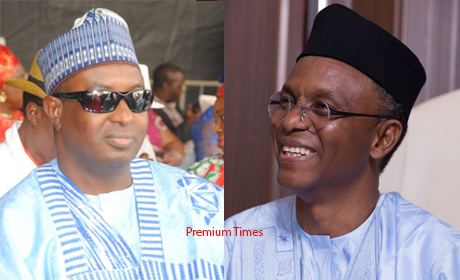 Governor Ramalan Yero of Kaduna State has denied reports that he threatened to attack the All Progressives Congress and its governorship candidate in the state, Nasir El Rufai.

Audio recordings obtained by PREMIUM TIMES had shown how the governor warned that if ever attacked by APC supporters, he will revenge.

He also threatened to bar Mr. El Rufai from entering Kaduna, and warned that he may demolish the former minister’s home.
At the flag-off of his campaign on Monday, Mr. Yero asked PDP supporters to physically challenge and confront supporters of rival parties. He plainly encouraged his supporters to be violent, vowing, “Anyone born of a woman who dares us we will use all the powers and force at our disposal to crush him,” he said.

Mr. Yero followed up this incitement to violence and anarchy by making wild allegations against El-Rufai and threatened Mr. El-Rufai

Mr. Yero said in Hausa: “I can assure you if today I decide you must not come to Kaduna, you will not, if I decide to destroy your house I can, if I decide to put you under house arrest I will. But if you have any doubts try us and you will regret it. If you dare us we will use powers vested in us to decisively deal with you.”
But in a statement Sunday, the governor denied making the remarks despite recorded evidence of his speech in Hausa language.

“It has come to our notice that some persons seeking to score cheap political points have resorted to ascribing negative meanings to the recent call by Governor Mukhtar Ramalan Yero on supporters of the ruling Peoples Democratic Party (PDP) in Kaduna State not to succumb to blackmail and intimidation ahead of the next general elections,” his DG Media, Ahmed Maiyaki, said in a statement Sunday in Kaduna.

“Such persons have misconstrued the Governor’s appeal on PDP supporters to brave the storm ahead of the polls to mean a call to violence. To put the records straight and to disabuse the minds of the general public, Governor Yero never and will never call for violence in a State that he has the privilege of being Governor in the last two years.

“It is however no longer news that some unscrupulous elements under the negative influence of some desperate politicians have resorted to threatening the liberty of people in the state to free democratic choices. Such people have hired thugs to threaten violence against anyone who dare express support to candidates of the PDP at all levels in some parts of the state. This is unacceptable and inimical to the basic principle of democracy anchored on the freedom of all citizens to support any party of their choice.

“While such politicians are encouraging intimidation and coercion in the political space, Governor Yero deemed it necessary to stand by democracy by asking the people to reject such negative antics. The Governor only urged members of the PDP and indeed all peace loving citizens of Kaduna State to defend their democratic rights by resisting any attempt at narrowing their choices in the next elections. People should be free to support candidates of their choice no matter the part of the state that they may reside.

“It is also on record that those now complaining of the Governor’s call said nothing when their foot soldiers attacked innocent citizens and destroyed campaign vehicles of opponents obviously under their directives. Such opportunists are obviously afraid that the Governor has exposed their ultimate plot, which is to capture political power through threats, blackmail and intimidation against the wishes of the majority of the people of Kaduna State.

“Governor Yero wishes to reiterate his call for peaceful electioneering campaigns by all political parties and candidates. The Governor also calls on the entire citizens of Kaduna State to resist intimidation against their rights to free democratic choice. It is unacceptable and Government will not fold its arms and allow a minority few to intimidate the majority into submission.

“The Governor therefore calls on the entire people of Kaduna State to remain calm and law abiding as security agencies have been directed to increase surveillance in order to defend the democratic rights of the people. Only those under the illusion of using threats, intimidation and coercion to garner political support should be afraid of Governor Yero’s position on this matter because their actions is contrary to the Rule of Law.”
Meanwhile, Mr. El Rufai has expressed his shock at the governor’s comment.
In a statement signed by his spokesperson, Samuel Aruwan, Mr. El-Rufai condemned the call by the governor on his supporters to resort to violence.

Below is Mr. El-Rufai’s full statement:

It will be difficult to come across a more astonishing articulation of irresponsible understanding of power than this. A supposedly democratically elected governor, is in the 21st Century, talking as if he can freely abuse or abridge the right of any citizen. We wish to remind him that the constitution and the laws of this country do not permit him the recklessness he is arrogating to himself. Two years in office as governor seem to have deluded Yero into a mistaken belief that he has the unchecked powers of an absolute monarch or tyrant.

We condemn this incitement to violence and the threat to the liberty and property of Malam El-Rufai. No politician is permitted to allow his desperation to retain office to lead to the outbreak of anarchy or violence in any form.We call on INEC, the security agencies, civil society organizations and the international community to take note of Yero’s incitement to violence. And also recent declaration by hunters to be part of his campaigns contrary to 23rdDecember, 2011 ban of hunting activities in the state.

El-Rufai is committed to free, fair and credible elections, conducted peacefully and which results reflect the expressed wishes of the people. We are campaigning vigorously, exposing the non-performance of the government, their wastefulness, their incompetence and their uncaring attitude to the security situation in Southern Kaduna and Birnin Gwari, their insensitivity and denigration of our citizenry. It is a wonder that Yero has never expressed concern at the toll of lives lost in those communities. Rather his passion is stirred only when electoral defeat is starring him in the face.

We are engaging the good people of Kaduna state with our programmes that spell out how we will address the issues that matter to the electorates. Yero has failed to abide even by his own call that all candidates should conduct an issue-based campaign. But we remain resolute in focusing on the issues because we are the alternative that the people are rallying to.

Once again, El-Rufai commends his supporters for their enthusiasm, passion and peaceful conduct. And we encourage them not to succumb to provocation.

We will continue to believe in Almighty God and good people of our dear state and will never derail like those who have assumed place of Almighty God.