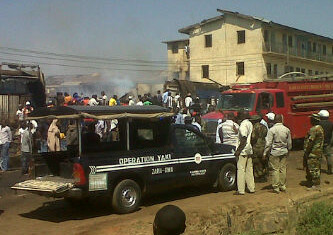 The police said the blast was a minor one.

There was calm on Wednesday at the scene of an explosion in Kaduna on Tuesday night.
Security personnel and the Police Bomb Disposal Unit were seen combing the scene of the blast which occurred at the foot of a provision store.

“We suspect that, they were targeting Sheikh Dahiru Bauchi’s security guards, because the blast missed them minutes after they left the area,” a witness said.

The Police Public Relations Officer, PPRO, Aminu Lawal, in an interview at the scene of the blast, said investigation into the remote cause of the blast has commenced.

“It is a minor blast actually, but our Bomb Disposal Unit have combed the area and investigation has already commenced. So far, no body claimed responsibility. However, only two people sustained minor injury and two vehicles had part of the glasses shattered,” he said.

Some security personnel who earlier cordoned off the area were seen leaving.

Meanwhile, the Governor of Kaduna State, Mukhtar Yero, has called on residents of Kaduna to remain calm.

An explosive device went off near the cleric’s residence, Asikolaye, along Nnamdi Azikwe way on Tuesday evening.

In a statement by his spokesperson, Ahmed Maiyaki, Governor Yero urged citizens of the state to be vigilant and not hesitate to report suspicious characters or activities to nearest security agencies.

“The minor blast which happened around Asikolaye area of Kaduna metropolis claimed no casualties, except for two persons who sustained minor injuries and were rushed to hospital for treatment.

“Investigations into the blast has already commenced while security operatives are already combing the area for suspects,” the governor said.

He urged citizens of the State to go about their lawful businesses without fear as security agencies are on alert to avert plots by terrorists.

While praying that God exposes those trying to cause mayhem in the land, the Governor called on the people not to despair and to remain confident of the ultimate triumph of good over evil.