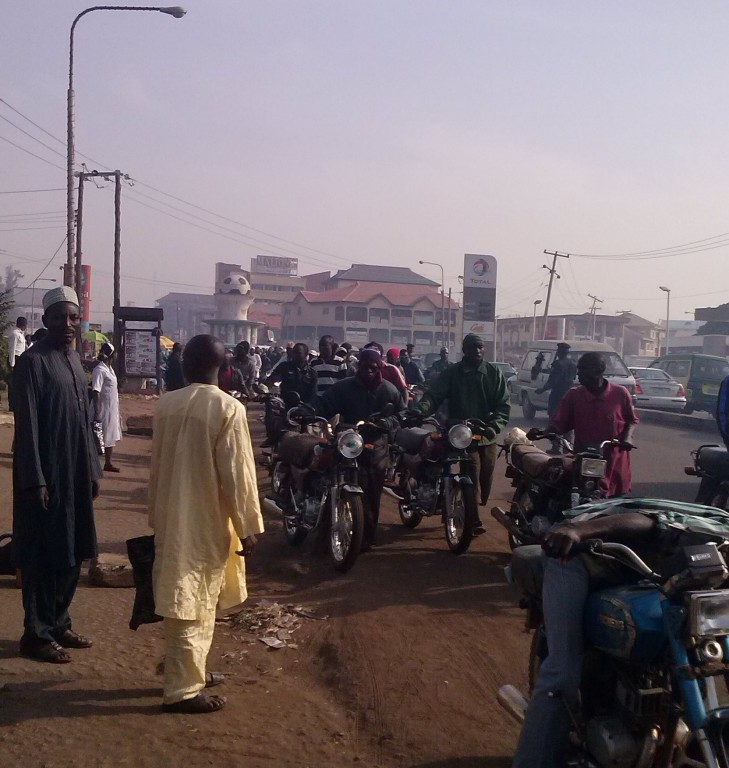 Motorcycle riders passing through a police check point in Kaduna

Kaduna residents are facing hardship following the bomb attack on a church in the Jaji military compond, near the city, on Sunday.

Residents of the city, already living in fear of terror attack, complain that life has gotten harder after security agents poured unto the streets barricading most roads for compulsory stop and search.

Motorcycle riders, popularly known as okada riders, are the worst hit. As they approach any check point, they are asked to come down and push the Motorcycle while the passenger follows on foot.

In some instances, the police officers on duty randomly select commuters at checkpoints, search pockets and let them go.

An okada rider who was searched at a checkpoint by the popular stadium roundabout complained of humiliation, adding that business has slowed down.

Many residents were forced to get to their places of work and businesses late.

Rita Dauda, a salesgirl in a furniture company along Constitution Road lamented the situation.

“My house is just few kilometres to my work place, yet I encountered three police and military checkpoints,” she said. “I have to walk long distance with the Okada man pushing his motorcycle before I got to work. Now I am tired every place is jammed, slowing activities within the state metropolis.”

A civil servant, Umar Abdulahi, had to trek a long distance to get to his work place. He said everyone is “tired of this check.”

“One can’t get to his place of business on time and some people are even humiliated by the security personnel at this checkpoints,” he added.

He said even school children were made to walk long distances for the checks.

A medical personnel, Hassana Mohammed, said even though she drove herself to the office, the checkpoints have become “unbearable.”

“A simple drive of 10 minutes took almost an hour just wasting my fuel,” she said.

Kaduna state is going to the polls on Saturday to elect local government leaders. The attacks and heightened security drills scare the residents too.

“With this kind of hardship I wonder how people will come out for the Saturday 1st December local government election in the state. I am tired of all this.” Ms. Mohammed said.

Dangote, Bill and Melinda Gates Foundations to kick out polio in Kano