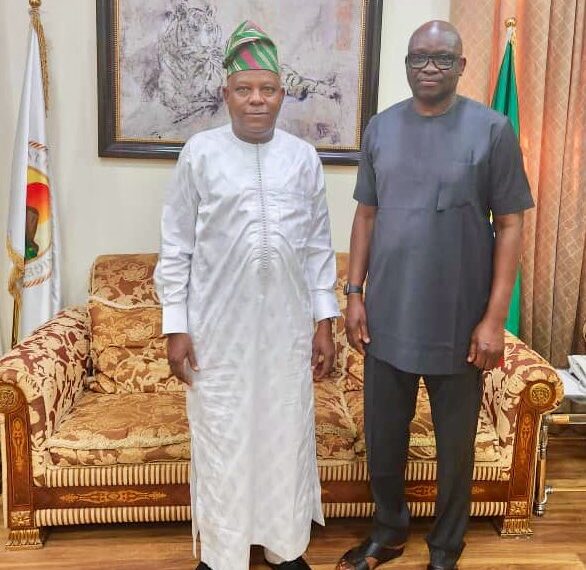 Shettima romances Fayose, thanks the PDP chieftain for support

Mr Fayose has been at loggerheads with the PDP after his preferred presidential aspirant, Governor Nyesom Wike of Rivers, was defeated by Atiku.

The Vice-Presidential candidate of the All Progressives Congress (APC) for the forthcoming presidential election, Kashim Shettima, on Tuesday visited a former governor of Ekiti State, Ayodele Fayose, at his Lagos home.

Mr Shettima posted about the visit on his Facebook Page on Tuesday night, including pictures showing him and his host shaking hands and smiling at each other.

“Thank you for your support and God bless you for hosting me and my team.”

Mr Fayose is yet to comment on his hosting of Mr Shettima and offer of political support to him.

However, news of the visit has elicited interest among many people on Facebook and the post has drawn about 500 comments as at 8 a.m Wednesday.

Mr Fayose is an influential member of the opposition Peoples Democratic Party (PDP) and his support for the ruling APC appears a major boost for the electioneering chances of the Bola Tinubu-Kashim Shettima ticket, especially in Ekiti State where the former governor enjoys huge following.

The development may also be a dent on the chances of the Atiku Abubakar-Ifeanyi Okowa ticket, which has been scrambling to establish strong footholds in Ekiti and other South-West States.

Mr Fayose has been at loggerheads with the leadership of the PDP after his preferred presidential aspirant, Governor Nyesom Wike of Rivers, was defeated by Atiku at the party’s primary last year.

The former Ekiti governor is a staunch member of the influential dissident camp in the PDP, being led by Mr Wike, which wants party chair Iyorchia Ayu to step down so he can be replaced by a nominee from the South of Nigeria.

The Wike camp is contending that with the presidential candidate of the party being from the north, the party’s chairmanship position should be occupied by someone from the South, in line with the party’s age-long zoning convention.

All entreaties to the aggrieved camp, which has five governors in its fold, to shield its sword and support Atiku has so far failed.

In frustration, the PDP leadership last week moved against Mr Fayose by suspending his son and dissolving the Ekiti State exco of the party. An interim party leadership was then immediately installed in the state

The moves by the party may have hardened Mr Fayose even further and push him closer to openly campaigning for Tinubu-Shettima ticket, to the detriment of his own party.