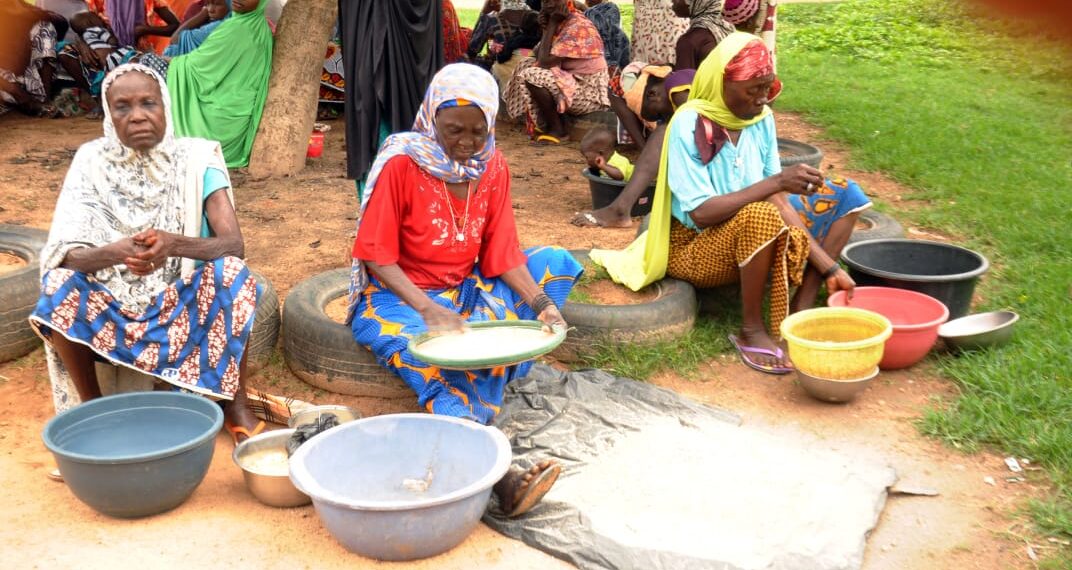 Pupils' access to learning is undermined as people forcibly displaced by Boko Haram Terrorists in Niger State have converted classrooms into IDP camps.

On 20 July 2022, hundreds of terror victims loitered around the Kuta displacement camp in Niger State. Dozens of men climbed the decaying fences of the place; others sat discussing under baobab trees, watching this visiting reporter. Women, many of whom were nursing mothers, clustered behind the walls and in the rooms of the camp.

As you moved around this place, the personal effects of the people welcomed your gaze. Wooden mortars and their pestles; aluminium pots and plates; local attires, and plastic wares were found in the rooms. Outside, newly hung laundries were waiting to dry and children scampered around.

What turns out to be a settlement for nearly 2,500 displaced people is originally a public primary school facility in Kuta town. Now, the activities of the people uprooted by war from different parts of the state are hampering academic activities in the place.

When PREMIUM TIMES visited the school-turned-camp, it was difficult to establish if learning was taking place as many of the classrooms had turned homes for the displaced persons who said their hope of returning home needed to be clearer.

At 10 a.m., children in tattered school uniforms were seen sauntering around the premises. Their teachers were nowhere to be found. As insurgency and banditry consume interior communities of the state, thousands of victims seek refuge in more protected towns and settlements, including the Central Primary School of Kuta town. But as they trooped in, the chances of children seeking basic education were more undermined.

Sadly, Kuta residents described the place as the best and biggest school in the town before it became a settlement for displaced persons. Several parents whom PREMIUM TIMES interviewed on the streets of the town said they have had to withdraw their kids from the school because “it has become overcrowded since IDPs started using the place.”

“My son used to attend this but I have now withdrawn him,” Abdulwasiu Ganiu, a Yoruba-speaking resident of the Kuta area, told PREMIUM TIMES. “Pupils can no longer get adequate learning here because they share the facility with thousands of people who ran away from the plagues of terror.”

Mr Ganiu’s comment mirrors the grudges of Kuta residents against the authority. More than 65 per cent of the classrooms were now occupied by terror victims, according to residents and camp officials. The overwhelming population of displaced persons also made many teachers of the school lethargic and discouraged parents who would want to enrol their children.

“Most of the children of the displaced persons also attend the school,” said Sheu Bello, a school teacher and Kuta resident. “So many of the children are crammed in the few classes left in the school, making learning difficult for them.”

Sending children out of school — for displaced persons

In Gwada, a town 20 minutes from Minna, the Niger State capital, the story is the same. The Gwada Model Primary School, the only basic public learning ground in the area, is now home to hundreds of displaced persons crammed in classrooms built for schoolchildren. Unlike the Kuta central primary school, where partial learning still takes place, schooling activities have been grounded indefinitely in the Gwada primary school.

A journey into the settlement of the displaced persons revealed a tale of terror rarely told by anyone. The children, as well as their parents, uprooted by Boko Haram terror in Kawure, a community in Shiroro, and other neighbouring towns and villages, are languishing in the camp without access to basic education.

At the Central Primary School, Erena, schoolchildren also share classrooms with displaced persons. About 20 classrooms in the school are equally divided between pupils and the people displaced by the rampaging violence in the state, according to officials in the camp.

Villagers from Kawure and other parts of the Shiroro area of the state have turned the school into their new settlements since armed bandits took over their homeland. A camp official, Kabir Erena, said that the pupils of the Central Primary School are suffering from the ripple effects of the activities of the displaced persons. He, however, noted that despite the current situation, academic activities — albeit ineffectively — are still ongoing in the school.

“You know they (the IDPs) now share the 20 classrooms equally with the school,” the camp official said. “But these children are still going to school; they are even on a holiday now.”

The terrorised persons in the schools converted to displacement camps have a common complaint: government abandonment. Our days of interacting with the IDPs confirmed their agitations. But the pains of some parents of pupils we spoke to was that leaving displaced and abandoned persons in the camps would only affect their children’s education, a claim PREMIUM TIMES found to be correct based on interviews with residents, officials and education experts. The situation in the camps still persists as of the time of this report.

Betrayed and abandoned by the government

In the Kuta IDP camp, Khadijah Abdullahi slept on the bare floor breathing heavily as passersby watched her pitifully. Her mother was said to have left the camp a few minutes earlier. The 6-year-old had been sick for days without any medical attention. Although she appeared to be deeply asleep with her two eyes shut, Khadijah’s body gestures suggested she was critically ill and needed some urgent medical care.

“But no one would bear the cost of her medical bill if she was taken to the hospital,” said Saudau Aminu, an elderly displaced woman, narrating that Kadijah’s father was killed by insurgents last year. “Since then, her mother has been the only one caring for the girl.”

At the edge of the camp, Ibrahim Maimako, a septuagenarian, trudged to meet his six children longing to find what would quench their hunger. The children, all out of school, said they had not eaten anything since the previous morning. At 1 p.m. on the day of our visit, what the children found to feed on were grains mixed with tiny stones packed from the leftovers of people in a nearby market. Mr Maimako and his children were winnowing stones out of the grains when PREMIUM TIMES asked him to tell his story.

Mr Maimako, once a prosperous farmer in the Zangoro area of Shiroro, became impoverished after several attacks by bandits on his community. Amid multiple violence, kidnapping and bloodshed by terror groups, the man lost his means of livelihood, making life miserable for him.

“I remember how I used to make over N5,000 on a basket of yams after subtracting the other cost of production; we used to be very comfortable,” the man said with teary eyes. “The bandits attacked our village for over four years now; they destroyed all my means of income, including my growing farmlands and my crops such as rice, cassava, maize, yam, soya beans and vegetables.”

The official in charge of the displacement camp in Kuta, Yusuf Bala, echoed the lamentation of the people. Mr Bala wore a sorry face while narrating how the government has abandoned the displaced persons under his watch at the expense of the schoolchildren.

In the camp, Mr Bala said, 2,424 internally displaced persons from various communities in the state have made the school their new settlement after the government kept them there with a promise to cater to them and restore peace in their homes.

The figure keeps increasing, the camp official said, as terror groups continue to displace residents from their homes in the interior parts of Shiroro. Now, over 1,705 children are living in terrible conditions too bad to afford education because they are in a school environment where academic activities have been halted.

He also said the number of children in the camp was three times higher than the number of men and women, adding that most of the displaced persons are from 17 communities in the Shiroro and Rafi local government areas of the state.

“The population is not steady,” Mr Bala said. “During the rainy season, most men still find their way to go and farm, leaving women behind.”

Asked about the problems faced by the IDPs in the camp, Mr Bala replied, saying: “Our major challenge here is that we don’t have food. We are in serious need of food.”

On market days, he continued, most displaced women and children would go to the market to hunt for food. Most times, he said, they sweep the leftovers of grains on the ground, come back to the camp and turn them into food.

“What they do is to separate the grains from the shaft they’ve all packed,” he said, a scenario PREMIUM TIMES witnessed from Mr Maimako and his kids. “You will see rice, maize and millet; it is very terrible. They are not finding life here easy but they are only surviving by the grace of God.”

The Director-General of the Niger State Emergency Management Agency (NSEMA), Ibrahim Inga, failed to respond to our inquiries on the lamentation of displaced persons and a message seeking his reactions to allegations of negligence was ignored.

PREMIUM TIMES contacted a spokesperson for the education ministry in Niger State, Jibrin Usman, but he directed the reporter to the State Universal Basic Education Board, a government agency saddled with the responsibility of catering to primary educational institutions.

But then, Idris Kolo, SUBEB’s spokesman, could not be reached via his known official line. A public service message this reporter sent to him was left unanswered.

The reporting for this story is supported by YouthHub Africa in collaboration with Malala Fund. The next of this reporting series on basic education in northern Nigeria explores how Kaduna displaced children find new hope in schooling despite insecurity.