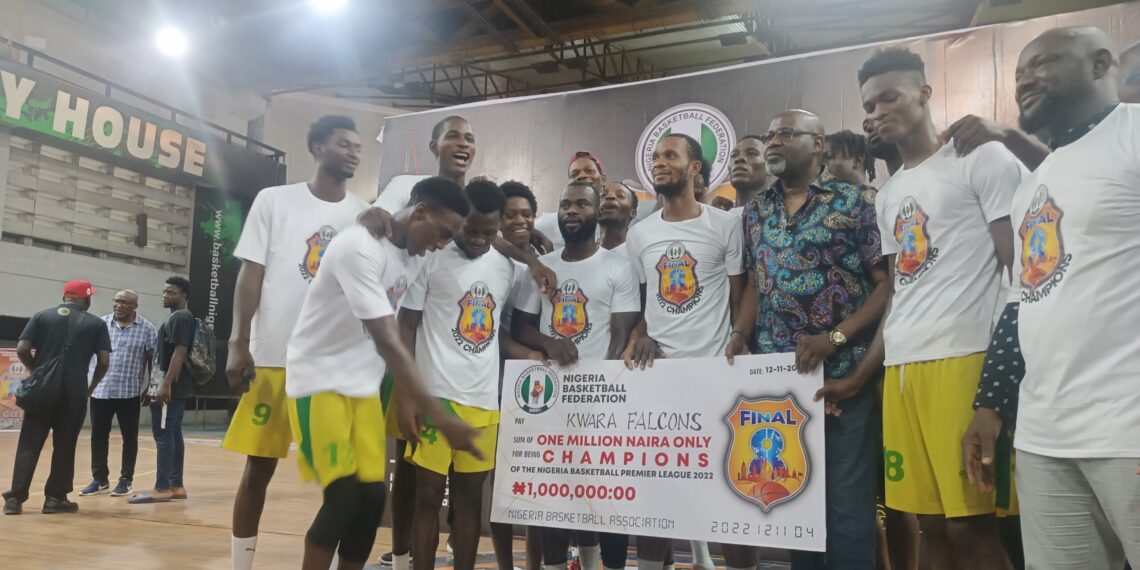 Kwara Falcons with their new feat, have secured a ticket to represent Nigeria on the Continent.

Saturday’s last contest between Kwara Falcons and the Nigeria Customs was witnessed by many dignitaries; including the NBBF president, Musa Kida who presented the prize money of N1 million to the winning team.

This year’s finalists are both debutants but they rightly earned their place there, having defeated top guns like Kano Pillars, and Rivers Hoopers on their way to the finals.

Interestingly, the Customs had earlier defeated the Harmony Warriors during the group stage, but they were unable to replicate the winning magic when it mattered most.

The first quarter ended 24-17 in favour of the Falcons. Meanwhile, a total of 13-point difference was recorded in the second quarter between both sides, where Kwara hit 43 points and Customs got 30 points.

The third quarter saw a more ruthless Kwara Falcons where players like Victor Eze and Dada Samuel, who was awarded the Most Valuable Player, hit three-pointers several times for the team and it ended 58-45.

The fourth quarter, which was the last round, sealed the first-ever trophy for the Falcons as they humiliated Customs 78-53.

In an exclusive interview with PREMIUM TIMES, Falcons Coach, Jibril Baba, said hard work made them succeed in the competition.

“Hardwork; they are players who are ready and hungry for success and they know what they wanted.”

“After winning the Sam Akpueje Championship, we knew what we wanted while going to the NBBFFINALS and we went for it. We knew it would be a back-to-back game as you said and we were prepared for it.

“Being young, their recovery rate is faster, and they are focused as wel”l.

While speaking about the trust in high school players in the team like Victor Eze and the Most Valuable Player, Dada Samuel, Baba said he was surprised with the level of play from the players.

“Definitely you have to believe the people you bring to your team but don’t expect the level of basketball the boys played. That means it shows there is a lot of potential in those guys if they are given an opportunity. Sports is evolving now, young guys are doing sports”

Baba then further added that some changes will be done to the team ahead of the Basketball Africa League, BAL championship.

“We are going to expose them, they need exposure. Everyone that will be added to the squad started as them too.”

Kwara Falcons ended their impressive show with one of their players, Dada Samuel clinching the Most Valuable Player Award.

Dada, who made more three-pointers and rebounds for the Warriors, told PREMIUM TIMES in an exclusive interview that this was his first year playing in the NBBF.

“I feel great because this is my first year playing in the NBBF. I’m so grateful to my coach and my team because I wasn’t expecting it. Those we defeated in the finals beat us in the group stage and they didn’t believe we will come out stronger like this.”

The final year student of Access College, Sango Ota continued that one of the secrets that helped him was picking off rebounds.

“My coach told me if I can pick a lot of rebounds and replace them, you will have a lot of points. That’s the reason I put in more effort on that.

He further added that his model is Kelvin Bryant.