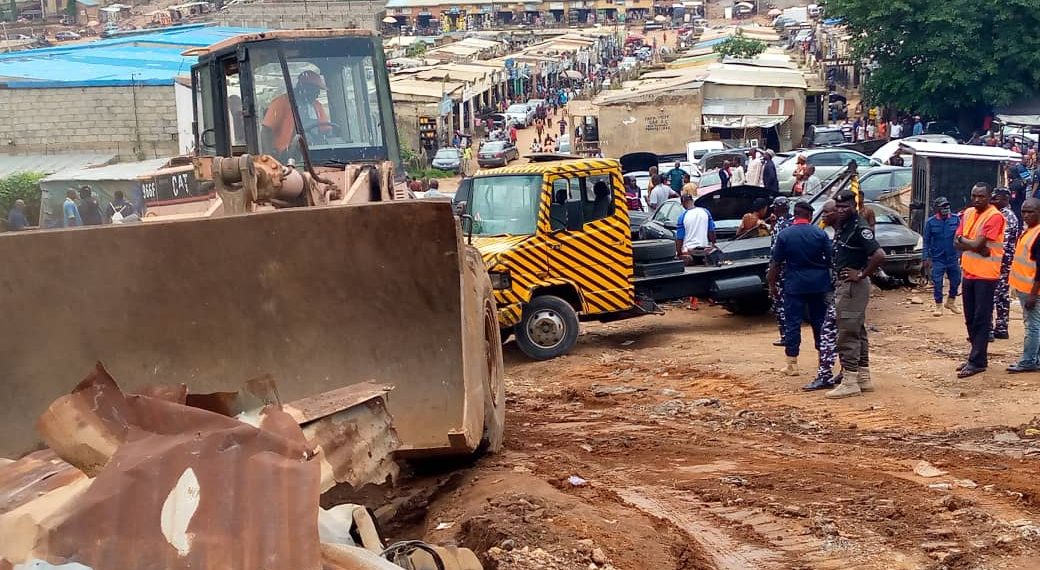 An FCT demolition squad on duty

The operators and owners of the workshops were also served reminders about five months ago to vacate the area, an Abuja official says.

The Senior Special Assistant to the FCT Minister, on Monitoring, Inspection and Enforcement, Ikharo Attah, who led the demolition exercise, explained that the workshop owners were served with quit notices three years ago.

According to him, the operators and owners of the workshops were also served reminders about five months ago to vacate the area.

Mr Attah further stated that the exercise was necessitated by complaints received from the FCT Agriculture and Rural Development Secretariat that some mechanics have taken over the land that was originally designated for livestock market.

The minister’s aide regretted that the situation had forced the ram sellers to move close to the main road which contradicted the sanity of the nation’s capital.

Mr Attah stated that dismantling the structures was in line with the resolve and commitment of FCT Minister, Muhammad Bello, to rid the Federal Capital City of illegality and restore the Abuja Master Plan.

“The demolition was part of efforts to enhance sanity in the city during the forthcoming Eid-el-Kabir celebration.

“We discovered that the Kugbo ram market is not where it ought to be, the stretch from the electric pole down to the other side has been occupied by the mechanics and some persons who deal on other items have forced the ram market out of its original place.

“Upon the complaints that we received from the Mandate Secretary of FCT Agriculture and Rural Development Secretariat and the need for us to conform to the Abuja master plan, we came here to clear the illegal mechanic shops.

“This is because we have given them warning for the past three years and five months ago. With this clean-up, the ram sellers can now have a good stretch that can be well planned by the agric secretariat, where to keep ram, goat and cows and many others.”

Mr Attah disclosed that the mechanics have their own land but they refused to stay there rather they decided to come and stay where was not meant for them.

“The mechanic workshops have cornered what belongs to Abuja ram market by the FCTA. So we have removed them from the entire stretch of land earmarked for ram market.”