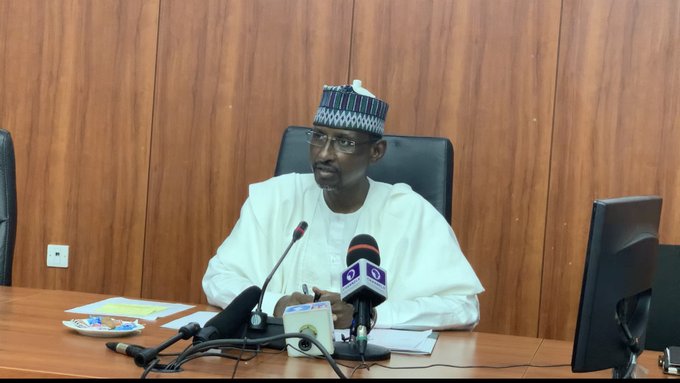 Why I refused to inaugurate elected FCT chairmen, councillors – Minister

Mr Bello said he was restrained by the court from inaugurating the FCT Area Council chairmen and councillors.

The Minister of the Federal Capital Territory (FCT), Mohammed Bello, has explained the reasons behind his refusal to inaugurate the area council chairmen and councillors months after election.

The inauguration was initially scheduled to hold on May 19.

Mr Bello, at the 40th media briefing organised by State House journalists in Abuja on Thursday, denied having a political agenda when he suspended the inauguration of the recently elected FCT councils executives a day before the event

He said he only honoured a court judgment, a case he played no role in instituting.

“With regards to the Area council elections that took place and the court cases. I want to emphatically say that obviously, for those of you who know me, I follow the rule of law. And this government is a government of rule of law. So you can be rest assured that the FCTA had nothing to do with the court case at all.

“It doesn’t make sense for us to superintend over an electoral process that was adjudged very transparent and we were commended because during that area council elections we lost some, we won some,” he explained.

Not less than 400 candidates across 14 political parties were on the INEC ballot as residents went to the poll on February 12 to elect their preferred chairman and councilors in Abuja.

At the end of two days voting exercise, the FCT six chairmanship seats and 62 councillors positions were filled as candidates of the ruling APC and main opposition, PDP, got three area councils each.

While APC candidates won in Gwagwalada, Abaji and Kwali LGAs, the PDP candidates emerged in Kuje, Bwari and AMAC, the city centre which hosts most of the government agencies.

The hopes of the elected candidates were dashed in May when Mr Bello suspended their inauguration.

In his defense on the subject among other issues peculiar to the FCT, the minister argued that Nigerians have often than necessarily been unfair to him in the assessment of his performance.

He slammed Nigerians who only ascribed his performance to demolition of buildings, an activity he argued were borne out of residents’ illegality.

Why we won’t stop demolition

The minister said it has become mandatory for his administration to pull down structures as developers and residents constantly flout the city plans.

“Maybe, I need to clarify my comment on demolitions and put it in the proper context. What I was saying is that it’s unfair for the general public to rate ministers based on destruction and demolition of property. So that is the main context as I said and I was bashed because I was not demolishing.

“But having said that, of course, we demolish and we will continue to demolish. As a matter of fact, as we are seated here, a team is demolishing somewhere already today. And these things will continue because no matter how you try, they are those who still would not want to follow regulations,” he said.

Speaking on the unoccupied estates littering the FCT, Mr Bello argued that some of the developers lack the idea of what sells in most cases as they erect super structures in areas that need something lesser.

He admitted that uncompleted buildings have contributed to the growing rates of insecurity in the city but explained that his administration has made efforts in identifying the buildings in question and engaging their owners.

In defence against speculations that some terrorists group have started building ceils across the FCT, Mr Bello said the city remains the safest in the country.

“About security, I want to tell you, the FCT is the most secure part of Nigeria today. Yes, we have insecurity here and there, it is a reality and it is a phenomenon that affects not just Nigeria but even our sub region.

“But what I do know is that the security agencies in the FCT are doing extremely well. Because I will say it again for every incident that you read in the papers or you see on social media or illicit on the radio. I tell you 10 to 15 cases have been nipped in the bud that are not out there in the public,” he said.