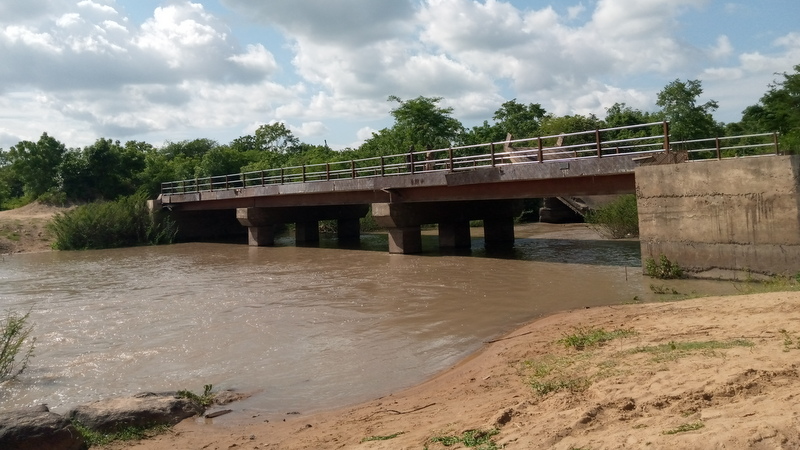 Weru Bridge under construction since 2015

For residents of these agrarian communities raining seasons are often bittersweet. While the rain leaves their crops nourished and their harvest bountiful, it often causes a nearby Weru River to overflow its banks leaving the community flooded.

Also, the overflowing river makes it impossible for residents to take their farm produce to the popular Malete and Olowu markets.

Despite budgeting N144 million in five years, the only bridge connecting these villages to the nearest motorable road has continued to suffer neglect.

In 2015, the then-senator representing Kwara North, Shaaba Lafiagi, elected the construction of a bridge over the flood-prone Weru bridge into the annual Zonal Intervention Projects (ZIP) at the sum of N45 million.

The project was to be handled by the Lower Niger River Basin Development Authority, (LNRBDA) a federal agency under the Ministry of Water Resources.

The project was also reinserted in 2016 at the sum of N44 million. Another N10 million naira and N45 million naira were allocated to the project in 2017 and 2018 respectively and tagged “Completion of Weru Bridge and Rehabilitation of Approaching Road in Moro LGA of Kwara North Senatorial District”.

But five years after the first contract for the bridge was awarded and N144 million disbursed, the project lies abandoned.

When Needs Technologies Limited, the contractor in charge of the construction of the bridge started work in 2015, residents of the communities were hopeful that their perennial worry was finally coming to an end. But their hope was short-lived as Needs Technology soon stopped work and moved its construction equipment out of the site.

Afusat Omoniju, a nursing mother and cassava farmer, said a large chunk of her harvest becomes rotten due to the difficulty in transporting her crop to the market.

“Whenever it is the raining season that we ought to take our harvest to nearby villages or Malete to sell, we won’t be able to. Weru River would be (so) flooded that drivers won’t want to come. It is only motorcyclists that ply this place during this period and they charged exorbitantly.

“Other villagers won’t be able to cross to our side and vice versa. The abandoned bridge is really undermining our activities. Now, our cassava is getting spoilt because we could not get them to the market. There is no vehicle, and there is a limit to what okada can convey,” she said.

It rained the night before this reporter visited the villages. The river had breached its bank and completely covered a makeshift wooden bridge built by residents as substitute the abandoned bridge.

To the right of the makeshift bridge, lay the decrepit uncompleted bridge. Youth were seen making quick money by ferrying people and their commodities across the river for N50 per trip.

If one considers that the main road leading to the village is in a deplorable state, the abandoned bridge, the fact that the villages have never had electricity and potable water, the communities seem separated from civilisation.

In 2016, the situation of Weru Bridge caught the attention of the Auditor General of the Federation. In his audit report, the contract for the construction of the bridge was awarded to Needs Technologies Limited at the sum of N98.7 million on 10th November 2015, with a completion period expected to last for 12 (twelve) months.

The report by the AGF, further, revealed that contrary to extant regulations stipulating 15 per cent as mobilisation fees, the sum of N26.8 million representing 27 per cent was paid to the contractor as mobilisation fee. A further payment of N16.8 million was made as preliminary expenses, including N2.9 million without proof of expenditure.

In 2018, an UDEME report of the project revealed that work stopped for over a year, exposing residents of the communities to untold hardship.

With a cutlass dangling in his left hand, Yusuf Salman, a resident of Omoniju, was on his way from his farm when this reporter accosted him.

As he led this reporter to his residence, he narrated the travails he faces to get his farm produce to Malete market. He said residents have since resigned to fate as they have lost hope that the bridge will be completed any time soon.

“We have been looking forward to when the bridge would be completed, but it seems there is no hope the project would ever be completed. It was started during the tenure of Abdulfatai Ahmed as well as this road. We were told it would also be constructed. Apart from disrupting our farming, it has also claimed lives. We don’t know what is stalling it. Although some of us have motorcycles, and that has been helping in conveying our farm products to other villages, particularly Malete or Alapa market, how about others?” he asked.

For Ismail Nurudeen, another resident of Omoniju, the road leading to the villages is also a source of constant worry for the inhabitants. He said the abandoned bridge has also undermined the economy of the surrounding villages.

“The abandoned bridge is giving our means of livelihood a hard knock. We can’t transport our farm produce to the ,arket anymore, especially whenever it rains.

“What we were told by the contractor was that they couldn’t proceed with the construction because the government has not paid them. When you get to the bridge, you’ll agree with me that no human should be subjected to the kind of suffering we face here.”

Residents of Oluwu, one of the surrounding villages in the area, have to travel for three hours to get to Malete market to sell their farm produce. The trip would have taken an hour if the bridge had been constructed.

The leader of Olowu community, Abdulwahab Salman, said he has repeatedly written to the government asking for help, but nothing has happened.

Mr Salman said politicians only come to the village during elections “when they need the votes of the people but vanish into thin air afterwards.”

Due to the flooded river, many school children have stopped going to school as their parents would rather have them stay home or help them with farming instead of risking their lives.

“The hardship we face cannot be compared to that faced by our children whenever it rains. Even before COVID-19, our children have (had) stopped going to school because it would be suicidal to attempt to cross the river to school when Weru is flooded” Mr Salman, a resident of Omoniju said.

When contacted, the managing director of Needs Technologies Ltd, Tajudeen Abdul, absolved his company of blame in the delay in the construction of the bridge. He blamed the paucity of funds and what he termed “unnecessary court trial”.

After the court dispute, which was raised by an unsuccessful bidder for the project, was closed, Mr Abdul explained his men had returned back to work.

He promised to forward pictures of the completed bridge to this reporter. But when he sent the pictures via WhatsApp messaging App, the new development only captured the removal of the supporting wood on the concrete deck and painting of the hand-rail.

“The bridge used almost four years before we could complete it, and ordinarily, we shouldn’t use more than two years. But the Senator didn’t have the money to put down N100 million at a time, that was the problem we first had with the project. Apart from that, we had to deal with the court case. We were sued by a man who said he was the one that should be awarded the contract. As such, we were ordered by the court to stop the project,” he said.

In 2018, Mr Shaaba reinserted the project into the annual zonal intervention projects to ensure the completion of the bridge as well as the rehabilitation of the approaching road at the sum of N45 million.

However, Mr Tajudeen claimed the rehabilitation of the road was not awarded to his firm.

“I told the senator that the amount budgeted would not complete the project. We all know the amount they were selling cement, iron rods when the project was awarded which nobody is ready to supplement or pay. I told the Senator that additional money would have to be appropriated to enable us to fill the two sides for easy passage along the route.

“It was later in 2018 that the Senator inserted the completion of the bridge and rehabilitation of approaching road for the two culverts at the sum of N45 million so that we can fill it up and do 500 metres each way. But basin (referring to the agency) refused to award it to us. We don’t know where the money went. We have completed the bridge; nothing concerns us with the approaching road. We only did what we were paid for. The agency should be held responsible for that of the approaching road.”

When reached for comment, the (LNRBDA) said the project was delayed in large part due to insufficient funding.

A breakdown of the amount budgeted and released between 2015 – 2018 showed that while a sum of N45 million was appropriated for the project in 2015, only N14.8 million was released for the year.

In 2016, another sum of N44 million was earmarked further for its construction, but only N36.6 million was the amount released for the year.

Although a sum of N6.4 million was released out of an appropriated sum of N10 million for the year 2017, no amount has so far been released for 2018 which captured the completion and rehabilitation of the approaching road despite a total sum of N45 million being the amount earmarked for the year.

Although no provision was made for the completion of the project in the 2019 and 2020 budget, the agency says it is working with the incumbent senator representing the district, Sadiq Umar, “to facilitate the appropriation of funds for the completion of the project as well as made provision for the rehabilitation of the approaching road next year as the 1,518m3 borrowed material provision to earth fill around the bridge abutment is insufficient to fil the bridge abutment to level and improve these section to put the road into effective use.”

“There was no appropriation for the project in 2019 and 2020 financial year, hence, the N4.7 million outstanding payment for the contract in the interim payment certificate approved since October 2019 could not be settled by the Authority. The total sum of N88 million has so far been paid to the contractor for certified work, out of the contract sum of N98.7 million with an outstanding balance of N4.7 million,” the agency disclosed.

The agency, therefore, said it is working to ensure that the contractor returns to the site for the completion of the bridge adding that he had done 98.9 per cent of the job.

This investigation was done as part of the UDEME project.

UDEME(www.udeme.ng) is a social accountability platform that tracks the implementation of developmental projects and how funds released for such projects are spent.