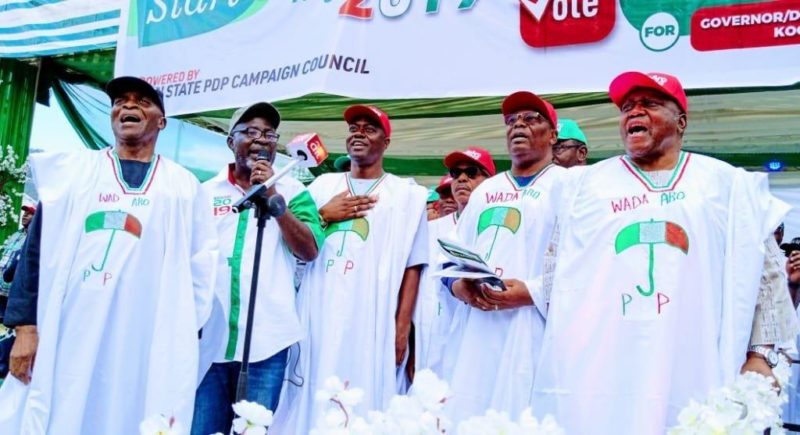 The Peoples Democratic Party Campaign Council for the Kogi State governorship election has raised the alarm over the influx of armed thugs into the state, alleging that they are in to thwart the November 16 election.

It has also called for the removal of the Commissioner of Police in the State, Hakeem Busari, for his alleged bias in the build up to the election.

A statement by the Deputy Director of Publicity of the council, Austin Okai, on Wednesday noted that the council had alerted the military special operation, “Ayem Akpatatuma” and other security agencies about the development.

The party urged the security agencies not to allow the armed thugs into the state, accusing the All Progressives Congress and the state government of sponsoring the thugs in order to prevent the people of the state from voting for candidates of their choice

“The influx of armed thugs is a direct affront by the current administration to cause mayhem on the hapless electorates, knowing full well that the outgoing governor, Yahaya Bello will lose the election by November 16,” the statement said.

The council also accused the police commissioner in the state of turning a blind eye to the development as he was in the knowledge of what is happening in the state.

It also alleged that the heavily armed thugs had started arriving from neighbouring states of Benue, Edo, Ondo , Enugu and Lagos with Agatu warriors from Benue fully on the list of mercenaries hired to kill and maim the innocent people during the exercise

Mr Okai said the PDP is calling on the security agencies to be professional in their approach and do a search of some hotels in the state where the thugs are allegedly being lodged.

He alleged that the state government had designated their arm caches in federal constituencies ranging from Lokoja, Kabba, Okene, Ajaokuta,Yagba east, Adavi, Ankpa, Anyigba, Idah in hotels and government lodges where the hoodlums are kept under a guarded police cover, to carry out their operations spread across the 21 local government areas.

“The party alerts the international community like Amnesty international, UNIDO, US embassy and the UK to beam its searchlight on Kogi election, as the current governor has declared war on the people of the state to win the election at all costs .

According the council, the pre-election crises, the kidnap, attacks, abduction and killings that would serve as a prelude to the main mayhem, had commenced in earnest.

Mr Okai said the council had the information that the thugs would be wearing fake police and army uniforms on the eve of the election to cause trouble in Kogi East and Kogi west.

But the police command in the state has denied the allegations by the PDP, saying the Commissioner of Police has been professional in the treatment of all political parties.

The police spokesperson, Williams Aya, told PREMIUM TIMES in a telephone interview that the police was yet to receive any information about the invasion of thugs into the state.

“We have not received any information that thugs are invading the state,” said Mr Aya. “But we are monitoring the situation and we are working to ensure that the electorates are secure during and after the election.”

With regards to the call for the removal of the Commissioner of Police, Mr Aya said the allegations were baseless as the CP had embraced all the parties.

Nigeria budgets N2,000 for the Healthcare of each citizen in 2020

Nigeria budgets N2,000 for the Healthcare of each citizen in 2020