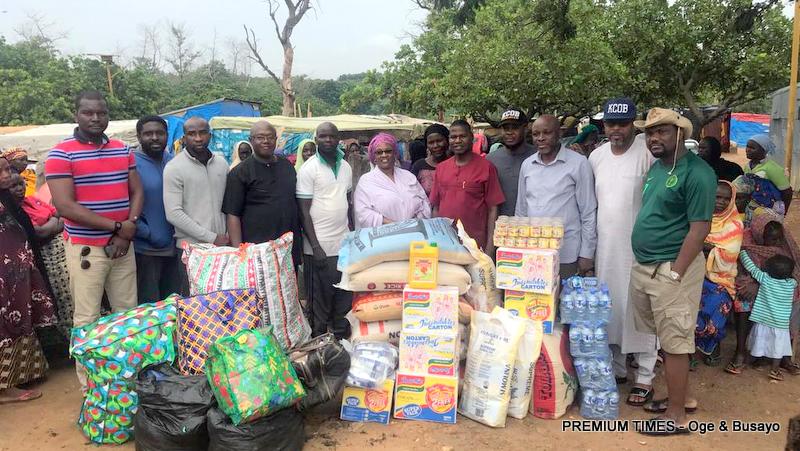 The KCOBA and the IDPs with gift items presented to the IDP's.

Internally displaced persons (IDPs) residing at the Kuchingoro camp in Abuja have decried the poor condition of the camp, blaming the situation on government’s neglect of the camp.

Philemon Emmanuel, the leader of the IDPs, said they have lived on humanitarian services by non-government agents.

Mr Emmanuel said this when the Kings College Old Boys Association (KCOBA), paid a visit to the IDP camp on Wednesday.

The Kuchingoro camp was established in 2014 by the federal government.

The residents were relocated from Goza Local Government Area of Borno State after Boko-Haram insurgents attacked their communities. Although the government had asked residents of the camp to return to their original communities in the North-east, many of them have remained in Kuchingoro, where they said they feel safe.

Mr Emmanuel said the condition of the displaced persons has continued to grow worse since they fled their communities for safety in Abuja.

He said apart from various organisations who have been providing them with basic amenities, “there is nothing donated by government in this place.”

There are two schools in the camp, a clinic, solar panels for an electricity-powered borehole, and a skill acquisition centre.

“We have a skill centre and my office from the High Commissioner of South Africa. We have boreholes, which come from churches and NGOs. It is only one borehole that was drilled by former FCT minister’s wife, Bala Mohammed,” he said.

She said her farm is located in Nasarawa state where she cultivates beans and maize.

“I spend about N4,000 every trip to my farm. I leave my children in the care of my husband whenever I am away”, she said.

She explained how she sells her farm produce at the beans market in Nasarawa.

KCOBA Chairman, Emmanuel Mogbolu, explained the purpose of their visit to the camp.

“We took it up as one of our social responsibilities as Kings College Old Boys Abuja to identify with the lower end of society, to see how we can support displaced persons in our society,” he said.

He said the association carries out such activities once in a year.

He said it was the first time the association was visiting the IDP camp in Abuja.

The vice president of KCOBA, Sini Kwabi, said they hoped to provide the communities with books to enhance their children’s education.

“If the opportunity comes, because I learnt they have some graduates, if we can be able to assist in our own way and we have the opportunity to employ some of them, we will try.”

They presented bags of rice, cartons of noodles, packs of water and clothes as gifts to the IDPs in the camp.