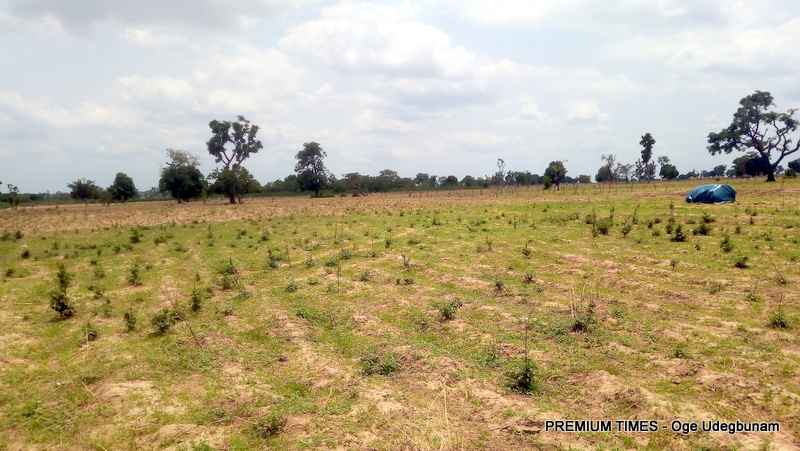 Farmers in Chukuku Tsoho community of Abuja have lamented the lack of access to fertilisers and basic amenities.

The community, with a population of about 1000 people, is located in the outskirts of the Federal Capital Territory (FCT).

Despite being located in the seat of power, farmers in this community say they have been neglected.

The farmers said the community lacks good roads needed for the transportation of farm produce, access to farm inputs and government benefits.

Several policies have been made by the Nigerian government to improve the yield of agricultural produce, but the agrarian community has not benefited.

A 70-year-old farmer, Yusuf Mamgba, tells PREMIUM TIMES about the challenges farmers in the community experience.

He said no ‘farm input’ is being distributed to the farmers in the community.

Mr Mamgba said the farmlands lack nutrients because of lack of fertiliser. He lamented that the prices of some of these inputs are ‘outrageous.’

The sorghum farmer said he cannot afford the fertiliser so he is forced to look for alternatives.

“I do not buy because I cannot afford it, we do not practice irrigation farming here,” he said.

“We have an overhead tank that is not working, it was constructed in 2005. It functioned for just one week and stopped,” he said.

Another farmer, who identified himself as Habakkuk, said all his life has been spent in the village, “yet no improvement in their source of livelihood.”

He said lack of farm inputs such as fertiliser and quality seeds reduce the yield annually.

He revealed that only one borehole is available in the community “which during the dry season does not function properly.”

“We have no good roads to transport our farm produce, we have no storage facilities. People even forcefully collect our lands from us,” he said.

Etsu Haruna, the community head, said even with his registration card as a farmer, he cannot access fertiliser.

The leader said the government should come to their aid and provide the necessary farm inputs.

He said, “It is a necessity on the part of the government to provide for them.”

He promised the inputs will be utilised properly.

On her part, Hauwa Isiaya said her maize farm needs fertiliser and water but she lacks these.

She called on NGOs and the government to assist the community “before they go into famine.”

“Even if the government cannot assist us, other well-meaning Nigerians and foreigners can help,” she said.

Marcus Isiaya said the farm inputs, if provided, will improve the yield of his farm produce.

He said it will encourage the community members to work harder.

Mr Isiaya said the availability of these inputs will reduce hunger and poverty in the community.

At the Kwali local government where the community is based, officials said they were no longer responsible for the distribution of farm inputs or fertiliser to local farmers. The head of the agriculture department in the local government, Hassan Ibrahim, referred all correspondence to the federal ministry of agriculture.

He said after the subsidy method, the E-wallet scheme came on board but this has been stopped.

He said currently, the ministry has no authority to supply these farm inputs to farmers.

According to him, the supply is done through the Central Bank of Nigeria (CBN)’s Anchor Borrowers Programme.

He said the duty of his department is to ensure that quality inputs are sold in the markets for farmers to access.

The director said that although the anchor borrowers programme ensures that farm inputs get to farmers through their associations, “they will not be able to cover (all) the communities.”

PROFILE: Bello Matawalle: PDP candidate who lost election but could be Zamfara governor