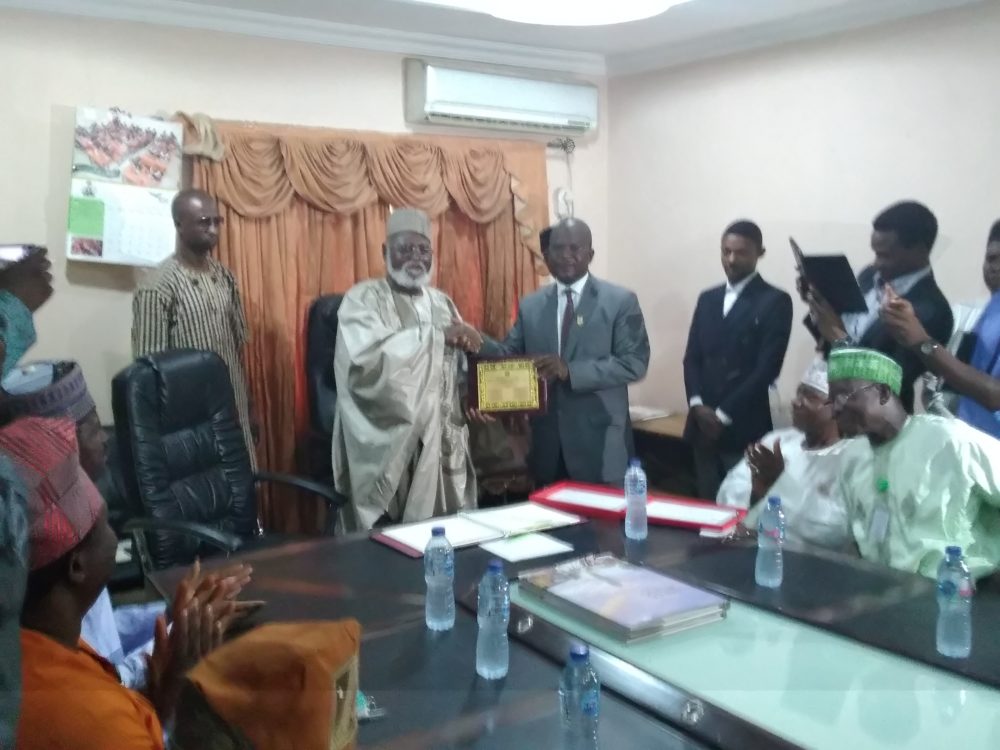 Former Head of State, Abdulsalami Abubakar receiving senior executives of the NIPSS study tour team course 41 who paid him a courtesy visit at his country home in Minna, the Niger state capital.

A former Head of State, Abdulsalami Abubakar, on Tuesday described the proliferation of fake, expired and substandard drugs as a major challenge in the Nigerian health sector.

Mr Abdulsalami, a retired general, said this while receiving senior executives of the National Institute for Policy and Strategic Studies, (NIPSS) study tour team course 41, who paid him a courtesy visit at his country home in Minna, the Niger State capital.

PREMIUM TIMES reported that the NIPSS delegation arrived at the state on Monday for a study tour of the health sector, especially the primary health system.

The visit is coordinated by NIPPS in collaboration with the Development Research and Project Centre (DRPC).

While receiving the delegation, the former military ruler, who is among notable Nigerians that have attended the NIPSS, expressed delight over the visit.

“I am very delighted to see you in my office. Since my retirement, I relocated back home. I think we have to thank the founding parents of the NIPSS for bringing this institution to brainstorm and bring solutions to the government,” he said.

“Since inception a lot has been done. I was a bit tickled when the team leader said healthcare delivery is the study this year because in 1985 when I was in the NIPSS, that was one of the topics.

“That time, there was Gongola and Plateau states. It was quite revealing to see some of the problems and medical challenges we have been facing which have lasted over a long period of time.

“One of the major problems then in 1985 was that there were drugs in a store in Plateau State that was produced in 1966. Because of the bureaucracy of the system, there was no authority to destroy the fake drugs and by and large, these drugs are (were) being circulated into the society.

“That was during the military regime. We immediately informed the military administrator of the state to come and see and thank God the next day the drugs were destroyed.”

Mr Abubakar urged the NIPSS delegation to look into the circulation of fake and adulterated drugs in the country. He, however, regretted that funding is a major problem with the health sector.

“I hope one day we will get out of these problems.”

According to NOIPolls, 18 per cent of Nigerians have personally been victims of fake, counterfeit and substandard pharmaceutical products, medicines and drugs.

The poll identified Independent pharmacy and drug hawkers as the two main points of purchase of fake drugs.

According to the National Agency for Food and Drug Administration and Control (NAFDAC), 17 per cent of drugs circulating in the country are fake, Vanguard Newspaper reported few days ago.

To tackle the adverse impact of fake drugs, a strategic plan to monitor the purchase, supply and distribution of drugs in Niger is underway.

The Niger State Drugs and Hospitals Consumables Management Agency (NSDHCMA) is now the sole distributor of drugs in the state, the management of the agency said.

“With the agency in charge of drug distribution in the state, it will be easy to trace the source of fake drugs and recall those already in circulation”, Mohammed Audi, the Executive Director of the agency said while addressing NIPPS delegation earlier on Monday.

Mr Audi said the establishment of the agency was in response to the national drug distribution guideline, “that says there should be a strata with clearing defined roles for drug production, distribution, manufacturing, importing and retailing.”

He said the agency is now charged with the responsibility of buying drugs from well established sources; then further distribute to both public and private care providers.