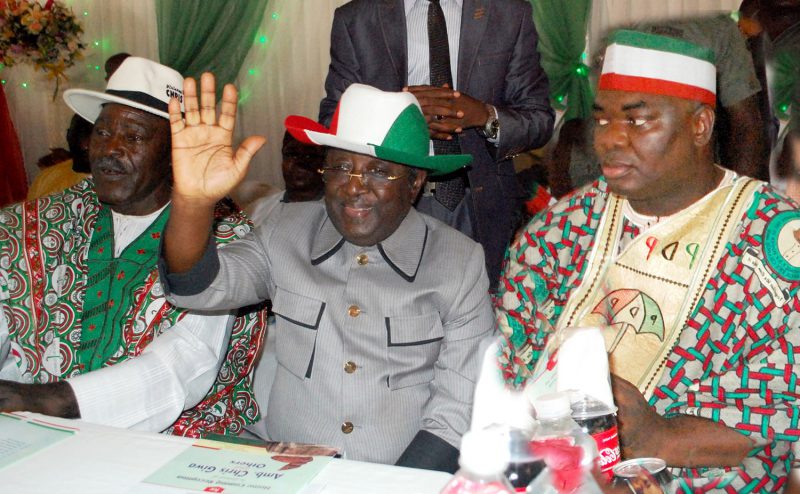 From left: Chairman of PDP in Plateau, Chief Damishi Sango; former Governor of Plateau, Sen. Jonah Jang; and Amb. Chris Giwa, during the home-coming reception in honour of Amb. Giwa to PDP in Jos on Thursday (22/6/17). 22/6/2017/Sunday Adah/BJO/NAN

As politicians jostle for their parties’ tickets to contest the 2019 general elections, the PDP in Plateau has set up a five-member committee to prune the number of aspirants seeking the governorship ticket.

Thirteen aspirants have purchased and submitted the party’s nomination forms to battle for the lone ticket in the PDP primaries slated to hold on Sunday, September 30.

According to Gwott Chocho, the State Organising Secretary, the 13 aspirants have been screened and given the nod for the contest.

Mr Chocho told the News Agency of Nigeria(NAN) on Thursday in Jos that the committee, led by former Deputy Senate President Ibrahim Mantu, has been meeting with the aspirants “individually and collectively’’.

“The committee is expected to speak with the aspirants and explore the possibilities of some of them stepping down.

“If some of them step down, it will be better for the party during the primary elections, but no one will be forced to step down.

“If we can reduce the number that will be fine, but if we cannot, they will slug it out for the ticket on Sunday,’’ Mr Chocho said.

He said a total of 155 aspirants have purchased forms to seek the party’s ticket to contest various offices, adding that 89 persons picked House of Assembly forms.

According to him, 31 people picked House of Representatives nomination forms, while the governorship and senate race recorded 13 and 16 aspirants.

Mr Chocho said the PDP would ensure a level playing ground for all aspirants, and advised them to reach out to the delegates who would determine their fate in the primary elections.

He expressed confidence that the PDP would win all elections in Plateau because voters were eager to replace the APC administration that he claimed had brought pain, anguish and starvation.

“We won all elections in 2015, but lost the governorship seat because we failed to adhere to the Plateau zoning formula. We have realised that mistake and have made amends.

“We have also decided that the governor will serve just one tenure so as not to hurt the zoning arrangement that had ensured stability in the Plateau political turf,’’ he said.