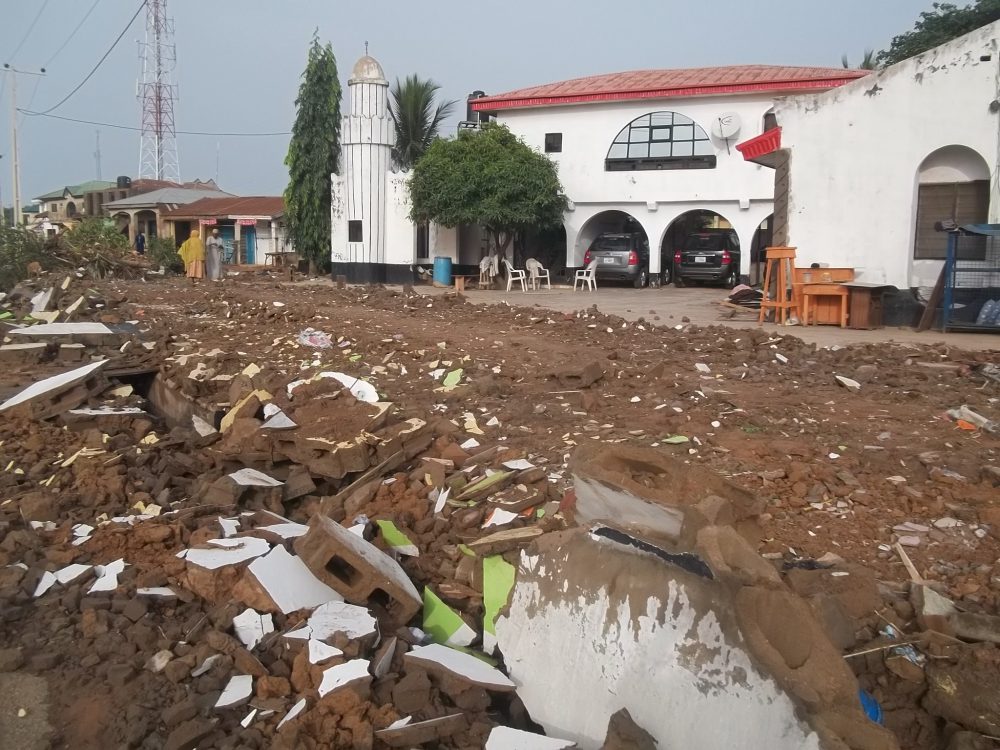 The exercise lasted from April 3 to 7 in Tanke area, while that in another area of the state capital known as Okeoyi was carried out about two weeks earlier.

Escorted by soldiers, an NNPC team bulldozed every structure deemed to have encroached on the pipeline. Private residences, schools, shops, police station, market place, and religious institutions all had parts brought down in the exercise.

Armed soldiers in the demolition team did not allow onlookers to take photographs of the exercise. In fact, an eyewitness said a female journalist reporting for the Nigerian Television Authority (NTA) was prevented from covering the event by the soldiers.

The demolition was said to have followed expiration of a seven-day ultimatum reportedly issued to the property owners by NNPC.

Findings, however, revealed that similar notices had been given by the federal government about eight years ago that property owners should take down their buildings that violated the five-metre set back rule in the designated areas.

The warnings were ignored largely to a perceived lack of political will on the part of the government.

An owner of one of the affected buildings, Gbenga Ibiloye, gave an account of what happened this time.

“The first day they came, they put marks on the structures and gave us just a week. They marked everywhere, that we should quit. After that one week, they came and demolished everywhere including my shop,” he narrated.

Usman Adam, an eyewitness and resident of the affected area in Tanke, however, blamed both the government and the people for the situation.

“As a matter of fact, government has its own fault, and the people too, have their own fault. Because, there’s no way you’ll build on pipeline and you take the plan to the Town Planning (Kwara State Town Planning and Development Authority), and they will not tell you that you’re building on pipeline,” Mr Adam said.

“People will still insist that the government will not come now, after all, for the past ten years, they did not do anything. Don’t worry, just help us do it. We’ll find our way. We would have even made our money before they come. So, most of them knew they were on the pipeline.”

“So, Town Planning did not do their job very well. They should not have even compromised of taken any money to approve plan for any building that encroached the five metres on the pipeline,” he said.

Another victim who declined to give his name, said the timing of the operation was wrong, in view of the harsh economic environment.

The Director of Kwara State Town Planning Authority, Raimi Adeoti, refused to respond to the allegation that his agency issued temporary approval for buildings on pipelines. Rather than answering the question via voice calls to his phone on two occasions, he resorted to intimidation before eventually hanging up.

At the first attempt on Sunday, Mr Adeoti queried our correspondent for engaging him on a non-working day. The next day, a similar effort was made but he further queried the medium used by our correspondent as inappropriate and hung up like he did previously.

However, an official of the agency who spoke on Monday but refused to give his name because he was not authorised to speak on the issue said the victims were all aware that it is illegal to build on the pipeline.

He confirmed that “the NNPC had been issuing warnings for close to 10 years to demolish the structures.”

Mr Akorede said: “The report has come to us and apparently it was being done by NNPC.”

He, however, stated that the state government was not aware of the seven-day notice issued before the demolition was carried out.

“The only thing I am aware of is that houses were demolished and all that .I don’t know what kind of communication went on between the NNPC and the owners of those shops,” Mr Akorede disclosed.

When asked if the state government was aware the Town Planning Authority issued temporary approval for the buildings, he said: “Well, as far as I am aware, the government does not issue temporary approval. It is either your house is approved or not. Another thing is, why didn’t they go for permanent approval before they started building? Assuming they got temporary approval, if they had gone for the final one, I’m sure it would have been rejected… That place belongs to NNPC.”