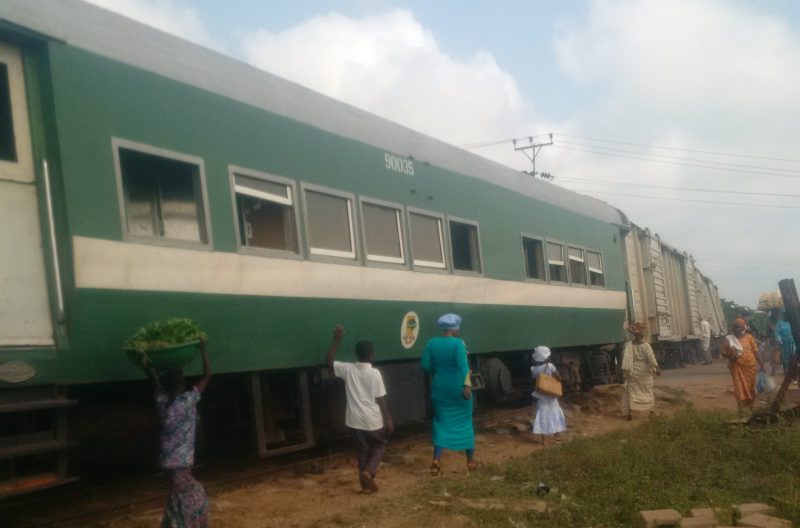 A luggage train derailed and got stuck at Omi-Adio railway crossing along Abeokuta-Ibadan road.

The Abuja-Kaduna trains service has received a boost with the arrival of 10 new coaches and two locomotives to be deployed by the Nigeria Railway Corporation (NRC) in January.

Mr. Adamu said that NRC would deploy them immediately after their inauguration, adding that preparations were already on for the ceremony in January.

According to him, the station expected the additional coaches and locomotives earlier, but could not receive them for logistic reasons.

“I am happy to let you know that the new coaches and locomotives have arrived here in Idu and have been installed awaiting inauguration.

“One locomotive and five coaches would be installed at Rigasa Station, while another one will be here in Idu so that our teaming passengers can enjoy the convenience.

“As you know, the ability to cater for the number of passengers here every day has not been met before, but with the new coaches and locomotives we are good to go.

“What this means is that in every two hours, passengers are sure of moving to and from Kaduna from both Idu and Rigasa stations,’’ he said.

Mr. Adamu also disclosed that a total of 6,287 passengers travelled through the station and from Kaduna between Dec. 21 and Dec. 26.

He said that 3,224 passengers travelled out of Abuja, while 3,063 passengers came to the city during the period, adding that highest number of 1,422 passengers was recorded on Dec. 23.

Mr. Adamu said that lowest number of passengers was recorded between Dec. 24 and Dec. 26 due to the weekend and the Christmas holiday, saying that the corporation usually operated only one trip on Sundays and public holidays.

He assured that there would be excellent train services from 2018 with the arrival of the additional coaches.(NAN)