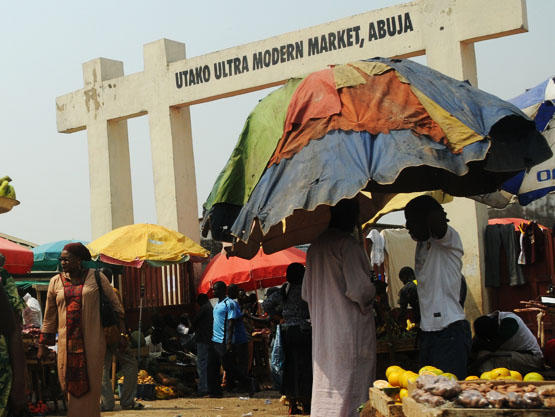 Scores of traders on Wednesday marched to the office of the Minister of the Federal Capital Territory, Muhammed Bello, to protest an alleged attempt to demolish the Utako Ultra-Modern Market in Abuja.

The traders said that the Abuja Municipal Area Council, AMAC, had moved in equipment to demolish the market to pave way for a private firm, M.N. ATAJ Construction Limited, to build a new market.

But security officers attached to the Federal Capital Territory Administration, FCTA, denied the traders entrance into the premises where the minister’s office is located.

The chairman of Utako shops owners and market association, Nelson Onwuemeodo, told PREMIUM TIMES that the traders were shocked to see police officers and containers moving into the market early Wednesday morning.

“It all started as a rumour early this year that they want to renovate and remodel our market. But it dawned on us yesterday when we got to our market and saw three containers dropped in our market, one looked like a site office and well designed. As at last night, another 40-foot container was dropped and by this morning, the market was invaded by the police.

“Utako Market was not built by AMAC. They allocated the empty land for us while we built the market based on their designs and supervision,” Mr. Onwuemeodo said.

“Where have we contravened the conditions of the allocation?”

He said the council did not invite the traders for negotiation before moving in police and engineers for demolition of the market.

“If the government desires to build a new market, let them go to a virgin land to build. But if they are bent on destroying the market, let them bring an independent valuer and we will bring ours then let them pay us the worth of the shops.

“Traders are the only ones that are not being covered by the government in Nigeria, yet we pay tax,” he said.

The secretary of the market association, Testimony Okono, said the traders were given a 99-year lease when the allocation was given to them in 1997. He said the market was commissioned in 2000.

“After five years, they came for the first demolition and went to build another upstairs without compensation of any kind. Each shop that was demolished is worth N500, 000 and the government promised to compensate the traders.

Muazu Hamza, the leader of the Arewa Association in the market, said it would be difficult for the traders to feed and survive if the market is demolished.

“AMAC told us to leave our attachment stalls and spoke to us to buy the new remodelled shops at N820,000 for 55 years. We were told to evacuate the market if we could not pay but we were able to pay through loans.”

“AMAC destroyed the market five years ago and now they did not call us for negotiation or agreement. It is our market, we built it ourselves.

“AMAC wants to collect it by force. They said we should not hold meetings and brought police to tell us to cover our mouths,” she said.

Speaking on behalf of the Abuja minister, the Director of Security Services, Bello Abdulateef, charged the traders to be law abiding and maintain the peace.

He advised that the traders to submit a petition to the FCTA, stating their position and the situation of the demolition.

“Even if you see AMAC or the construction companies digging, do not use any force because the authority is already listening. But if you take any action otherwise, the police force may need to maintain peace and order,” he concluded

Meanwhile, the traders said they wrote officially to the Abuja Minister and the State Security Service, explaining that they embarked on the protest because they did not receive any response to their letters.