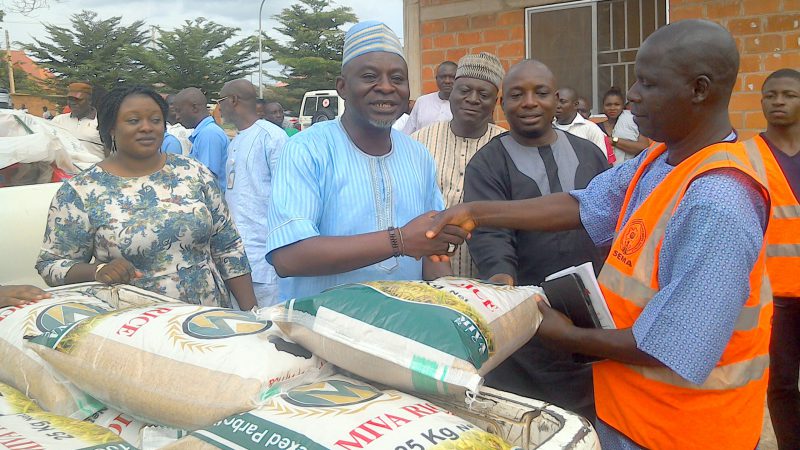 As part of its corporate social responsibility, the Jos Electricity Distribution Company, JEDC, on Monday donated relief materials to victims of Benue flood.

The regional manager of the company in Benue State, Ayodeji Adesoye, handed over the relief materials to the director of the camp, Vincent Tsea.

Mr. Adesoye, who spoke before making the donation, said the gesture was in the spirit of brotherliness and concern for the welfare of consumers in its franchise state.

Mr. Adesoye, who reassured the company’s concern for its consumers, used the avenue to charge users of electricity to return the gesture by ensuring payment of electricity bills.

”Today we want to come and practically demonstrate to you that we are partners and that the partnership transcends us giving you light while you people in return paying electricity bills.

“We are here to identify with you during this trying moment and to also encourage you to remain strong with the belief that this is not the end of life.

“Though we are not praying that this ugly incident happens again, it is our resolve that we shall continue from time to time to come around and intervene with the hope of making life much better while you people are still here’’.

The director of the camp, Mr. Tsea, who received the items on behalf of the displaced persons, thanked the company for the donation saying it was the first corporate organisation to identify with the victims.

Mr. Tsea charged the beneficiaries to reciprocate the gesture extended to them by the company by avoiding acts that could jeopardise the functioning of the company in the state.

Speaking to PREMIUM TIMES, the head of corporate communication JEDC, Adakole Elijah said that no damage was done to any of its facilities.

“It is part of our corporate social responsibility to provide aid to people in our franchise area. No damage was done to any of our facility yet,” he said.

According to official estimates, the flood affected 24 communities and displaced more than 100,000 people.