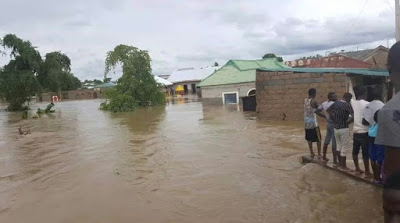 A flooded area used to illustrate the story [Photo: www.taritariboblog.com]

The Speaker of the Kogi House of Assembly, Matthew Kolawole, says the Assembly will soon amend the state’s environmental and town planning laws to adequately address flood issue.

Mr. Kolawole said this while on a visit to flash flood disaster areas in Felele, Lokoja, on Saturday to assess the level of devastation in the town.

The speaker identified building of structures on waterways as one of the major causes of flooding in the area.

According to him, there is dire need to enforce town planning and environmental laws to address the perennial flooding.

He said there was also need to reposition the town planning sub-sector for better and efficient service delivery.

The speaker promised to work with his colleagues to initiate bills and motions that would assist the victims.

Mr. Kolawole sympathised with the people living in Felele area over the ravaging flood, which washed away more than 100 houses.

He said it was imperative for him to visit his colleague and the people to see things and identify areas of support and assistance to the victims.

Responding on behalf of the community, Idris Ndako, representing Lokoja constituency, thanked the speaker for the visit and commended Gov. Yahaya Bello of Kogi for his response to the emergency.

“It is a sign of a good leader, who cares for the people, it is worthy of note for the government to have immediately opened a camp for the victims at Siriki Noma.’’

Mr. Ndako, however, implored the government to open another camp at Felele area and urged the National Emergency Management Agency (NEMA) to come to the aid of the displaced households.

Torrential rain on Wednesday night and early hours of Thursday resulted to flooding which destroyed properties in Sarkin-Noma, Felelele, Nataco, Gadumo and Ganaja areas of Lokoja.