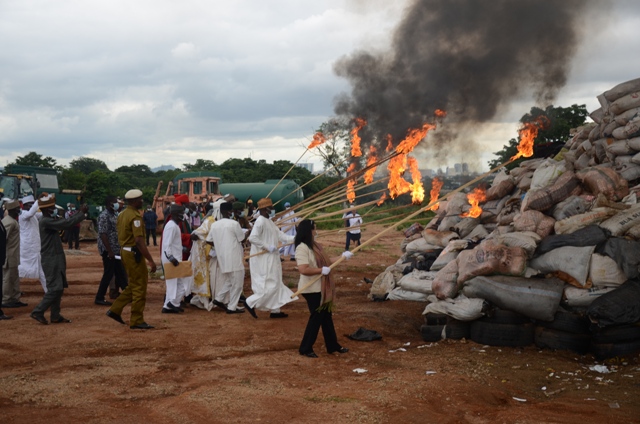 The exercise is sequel to two destruction orders signed by judges, Nnamdi Dimgba and A. Abdulkafarati of the Abuja Division of the Federal High Court.

The exhibits with an estimated street value of N250 million were jointly set ablaze by local and international collaborators at Lungi barracks along Aso drive in Abuja.

Muhammad Abdallah, the Chairman of the agency, who described the destruction as symbolic and strategic both to the agency and drug control policies of the government stressed that seized drugs remain a threat until they are destroyed.

“Public destruction of drugs is the climax of operational activities which begin with tracking of suspected drug merchants, drug exhibits, prosecution of drug dealers and forfeiture of the drugs,” Mr. Abdallah, a retired colonel, said.

“Until drugs are completely destroyed they remain a threat to societal peace,” he added.

PREMIUM TIMES reports that the drugs are products of concluded drug cases by the FCT command in the past two years, precisely June 2015 to date.

Muhammad Bello, the FCT Minister, who was the Special Guest of Honour commended the NDLEA for the seized drugs and also urged the agency to extend the war on drugs to the grassroots and motor parks.

The minister who was represented by the Chairman, Abuja Municipal Council, Abdullahi Adamu, said that he appreciated the efforts of the agency to keep the nation drug-free.

The Ona of Abaji and Chairman Council of traditional rulers in the FCT, Adamu Yunusa, called on youth to stay away from drug trafficking, drug abuse and other acts that are injurious to the society.

Earlier, the FCT Commander of the NDLEA, Obijuru Chinyere, in her welcome remarks said that the command will step up campaign programmes in schools, workplaces, religious and worship centres to address the problem of drug abuse within Abuja.

Mrs. Chinyere added that the volume of the seized drugs reflects the high demand for drugs within the FCT which is alarming.

“There is a growing obsession of youths with the use of psychotropic substances particularly cough syrups with codeine, tramadol as well as unconventional substances like gasoline, tippex, rubber solution, lizard waste, pit latrine fume, and local concoctions such as ‘goskolo’ and zakami which require urgent attention” the NDLEA boss said.

The agency reassured members of the public that the war against drugs shall be intensified.

Present at the event were representatives from the National Assembly, members of the diplomatic community, military and paramilitary agencies among other groups.