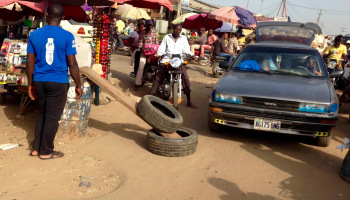 The Kubwa/Maitama Village Market Traders Association in Bwari on Tuesday called on the area council to postpone the planned demolition of their business areas.

The traders made the call at the meeting between the Bwari Area Council executive, traders and developers that held at the Bwari Legislative Chambers.

The meeting was aimed at finding an out-of-court solution to the issue of demolishing the existing markets for new ones and also avoid damages that could result from the exercise.

He said the market consist of 3,000 traders and appealed to the council to postpone its demolition plan to allow traders work out alternative places.

Mr. Buhari said “we appeal to the council Chairman to intervene in this matter; he should give us some time because most of our members are currently faced with economic challenges.

“Some of us borrowed money to buy and sell in the market; so we plead with the authority to postpone its demolition till Jan. 2017.

“We signed the document for demolition of the market, but we did not expect them to come so soon due to lack of communication, they didn’t tell us about the demolition deadline early enough,” he said.

Meanwhile, Nwankwo Ezenchi, Chairman of the Kukwaba market, said although the Court had passed judgement for the demolition of the place, the issue could be settled out of Court to avoid damages.

“What we want the council Chairman to do for us is to give us some time to pack out our belongings from the market and relocate to another place,” he pleaded.

He explained that the issue about market demolition had been at the Abuja High Court 34 since 2004, adding that “our appeal for the council authority is to shift grounds”.

Speaking, the Market Developer, Ahmad Muhammad, promised to be considerate with the traders during the demolition of the market.

Mr. Muhammad, who is also the General Manager of H and L Construction Limited, said “we will do all we can to ensure that no trader is stranded during the market demolition.

“We will co-opt some of the traders into our team during the demolition. Many of them are already aware of this and we will work together to actualise the goals.”

Responding, Musa Dikko, Chairman of Bwari Area Council, promised to hold further discussions with the leadership of the traders towards working out better options to resolve the matter.

Mr. Dikko recalled that the traders and the past council administration had entered into an agreement on demolition of the market in order to build a modern one.

“You had entered into agreement in April 2015 and my administration came on board in May that same year.

“I have visited the place as I assumed office as Chairman and I also discovered that there was no valid list of allottees; if you had not signed the document I will have asked why.

“What is happening now is only an implementation of what had happened; I will still hold round table discussion with the aggrieved parties, to come up with a lasting solution,” he said.

The News Agency of Nigeria (NAN) reports that the high point of the meeting was the presentation of the signed document of demolition earlier signed by the traders Chairman. (NAN)