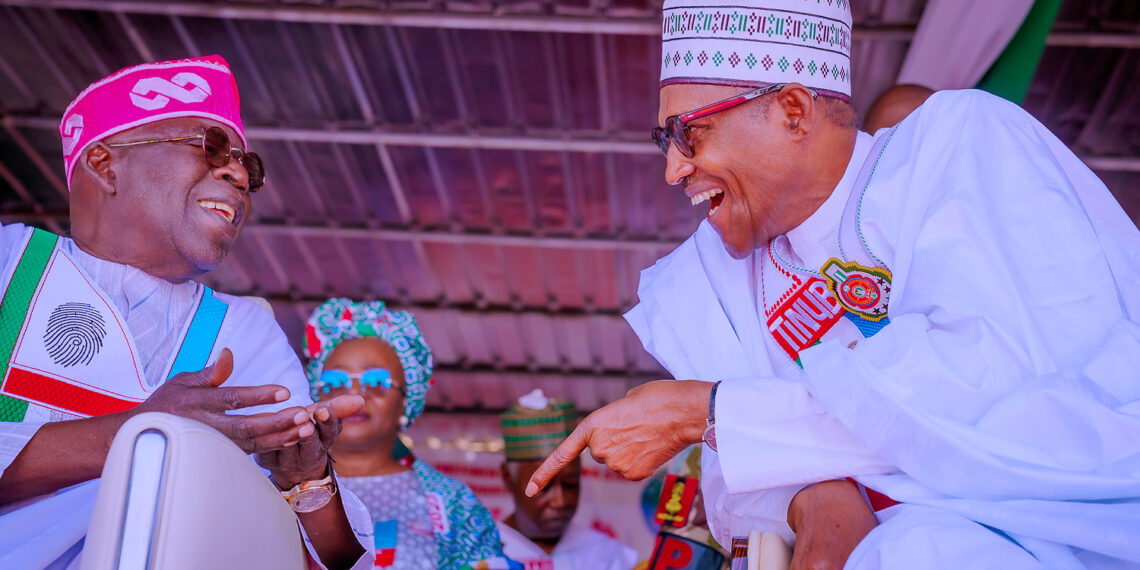 Buhari in Adamawa: Tinubu and President Buhari having a side chat during the campaign rally [PHOTO: Presidency]

After a long wait, the president and Mr Tinubu left the venue without addressing supporters of the party.

President Muhammadu Buhari and Bola Tinubu, the presidential candidate of the ruling All Progressives Congress (APC) could not address thousands of supporters that attended the party’s presidential rally in Bauchi on Monday due to a malfunction of the audio system at the Bauchi Stadium.

Soon after the rally commenced, the audio system abruptly stopped working and all the efforts to get the audio system up and running failed. After a long wait, the President and Mr Tinubu left the venue without addressing supporters of the party.

PREMIUM TIMES observed that the sound system stopped working when the National Chairman of the All Progressive Congress (APC), Abdullahi Adamu, was about to call the president and the presidential candidate to speak.

However, Mr Buhari handed over the party’s flag to Mr Tinubu and waved to the crowd from the podium.

Meanwhile, before the sound system at the rally became faulty, the APC candidate, Sadiq Abubakar, promised to enrol more children in school to roll back the high number of out-of-school children in the state.

Mr Abubakar also promised to reduce maternal and infant mortalities in the state.

He said he will use his experience in the military and the training he obtained while working with President Buhari as the Chief of Air Staff to improve a lot of people in Bauchi.

“Under Buhari’s administration, we commissioned many Air force Base and units for rapid response to improve security in various States in Nigeria including Bauchi.

“This shows the concern that President Muhammadu Buhari has for the security of Nigerians, I will replicate the discipline I learnt from working with the president to improve security in Bauchi State.

“If given the opportunity I am assuring you the number of out-of-school children in Bauchi state that are up to 1.4 million roaming the streets, we will take them back to school God willing.

“I will initiate a program to help the large numbers of Bauchi unskilled youth who are roaming the streets unengaged.

“Today in Bauchi’s hospitals 1,549 women are dying in every 100,000 live births. This shows that the government is negligent, we will address this problem by ensuring access to medical care across the state by building more facilities and services for health seekers.

“We are appealing to the people of Bauchi State to ensure that they vote for all the candidates of the APC in the state.

“Bola Tinubu will sustain the good work initiated by President Buhari including the drilling of the crude oil found in Bauchi and Gombe if elected into office.

“I am appealing to the former governors in Bauchi and the party chieftains to join the campaign and work for the success of the party and the good of our people.

“I called on every one of us to join hands to serve our people from the misrule of the Peoples Democratic Party”, Sadiq Abubakar said.

A former governor of the state, Muhammad Abubakar, who was rumoured to have left the party, attended the rally and he endorsed the APC governorship and the presidential candidates.