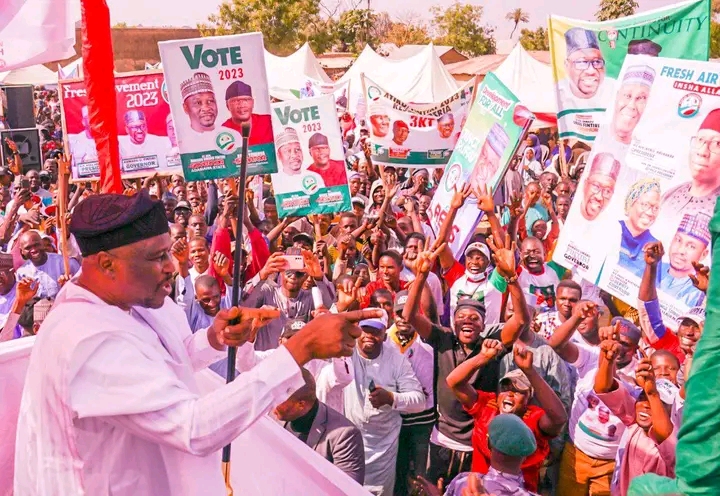 Governor Ahmadu Fintiri of Adamawa State continues his campagin after losing after five people from his convoy.

The latest accident occurred less than one week after the governor was involved in another crash.

At least five people in the convoy of Governor Ahmadu Fintiri of Adamawa State died in a road accident on Thursday. The governor, who is seeking reelection, did not halt his rally despite the fatal accident.

It comes few days after Mr Fintiri also escaped death in an accident.

On Saturday, a truck reportedly rammed into his convoy at the Dougerei hilltop area near Agga Mosque in Jimeta.

Two police officers who were injured in that Saturday accident are currently receiving treatment in the Intensive Care Unit (ICU) of the Yola Specialist Hospital. They are reportedly responding to treatment.

Thursday’s accident involved a Toyota Hilux conveying a detachment of vigilantes, accompanying Mr Fintiri on his way to Mubi for the 2023 gubernatorial campaign.

An eyewitness told PREMIUM TIMES that the accident occurred due to overspeeding.

The Toyota Hilux van, used by the head of vigilante at the Government House, veered off the road and crashed leaving three persons dead on the spot.

Two corpses recovered from the vehicle were identified as those of the head of the vigilante, Bako Kaura, and his son, Adamu Kaura.

The third corpse could not be identified.

It was gathered that two other victims later died in the hospital though they are yet to be identified by name.

Mr Fintiri confirmed the incident and called for prayer for the dead persons.

“On our way coming here for campaign, some of our supporters in our convoy were involved in an incident and some of them died.

“I called on you to rise for one minute and pray for them, May Allah reward them with paradise,” the governor said at the campaign rally in Mubi town.

Despite the fatal accident, Mr Fintiri proceeded with the rally at Mubi during which he pledged free education if elected.

“I came to Mubi for the campaign in 2018, and in 2019, I prayed to Allah for success to bring succour to the downtrodden and he has answered our prayers.

“I have initiated 11 points agenda in which I prioritised security and we have succeeded in securing the people and we will ensure that the people of the state are secured.

“I will make education free, I will pay scholarship and make a registration for the final year students in secondary school free,” the governor said.