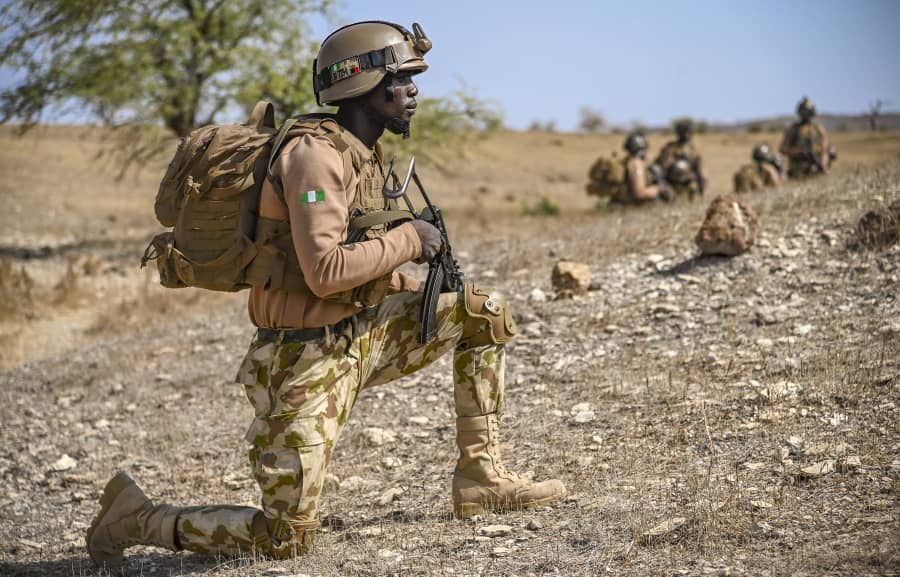 DHQ also said 965 terrorists and thier family members surrendered to the troops in different locations with the theatre of operation during the period.

The Director, Defence Media Operations, Bernard Onyeuko, a major general, said this while giving update on military operations across the country between January 20 and February on Thursday in Abuja.

Mr Onyeuko said several ISWAP commanders “including their Amir and some foreign mercenaries who make improvised explosive devices were killed during air raids and land operations”.

He also said 965 terrorists and thier family members surrendered to troops in different locations within the theatre of operation during the period.

Mr Onyeuko said 104 of the surrendered terrorists were from the ISWAP group while 25 abducted victims were rescued during the operations.

According to him, the terrorists have been properly documented and handed over to the appropriate authorities for necessary action.

He added that 50 terrorists were arrested from different locations by the troops while five gun trucks and cache of arms and ammunition were recovered.

According to him, troops also recorded significant results at various locations in Adamawa and Yobe around Goniri in Gujba Local Government Area of Yobe State.

“Notably, the air interdiction eliminated several ISWAP commanders and their fighters during the encounter.

“In the air strike, ISWAP senior commander Malam Ari, the Amirul Fiya in charge of Kirta Wulgo and some foreign mercenaries fabricating Improvised Explosive Device for the terrorists were killed during the airstrike.

“In the process, troops neutralised scores of terrorists including high profile commanders, while about 25 terrorists got drowned in the lake in an attempt to escape the bombardment.

“The ISWAP armoury and warehouse were also destroyed and arrest of several terrorists, recovery of assorted arms, ammunition were made, along with their gun trucks and other weapons.

“Also, livestock and other items of security concern were recovered as well as rescued abducted civilians,” he said.