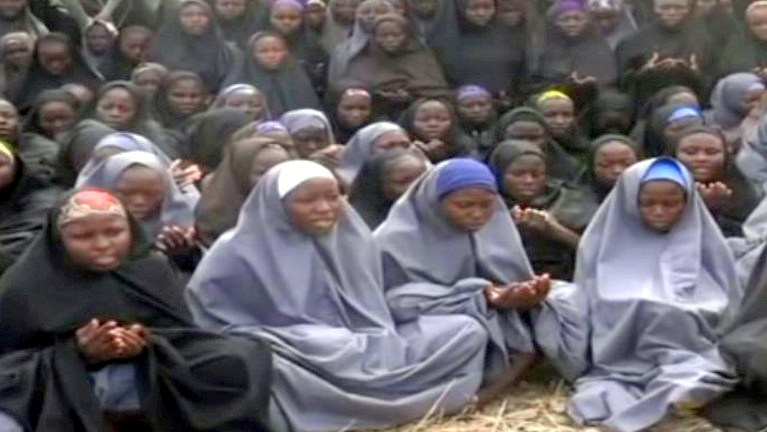 FILE PHOTO: A screengrab taken on May 12, 2014, from a video of Nigerian Islamist extremist group Boko Haram obtained by AFP shows girls, wearing the full-length hijab and praying

The terror group, led by the now factional leader, Abubakar Shekau, had, in April 2014, claimed responsibility for the abduction of 276 female students at Government Secondary School Chibok.

The terror group, led by the now factional leader, Abubakar Shekau, had, in April 2014, claimed responsibility for the abduction of 276 female students at Government Secondary School Chibok.

57 of the schoolgirls managed to escape following their capture, mostly by jumping off lorries and fled to bushes.

82 of the abducted schoolgirls were rescued, one other girl found 12 days later.

The spokesperson of the community, Allen Manasseh, in a statement, said ever since, Boko Haram has continued unleashing terror on Chibok community, stating that “On the eve of Christmas, our key farming Community of Pemi was attacked, in which we lost 7 lives and 2 abducted till date, with Churches, and many houses raised down by the terrorist.”

The group demanded that just as the government rescued the schoolboys at Kankara in Katsina and Dapchi Schoolgirls in Yobe, they should, in the same vein, rescue the remaining 112 Chibok schoolgirls in the quickest time possible.

Read the full statement below –

CALL FOR GLOBAL EFFORT TO SAVE CHIBOK COMMUNITY FROM TERRORISM

“The frequency and magnitude of attacks on the Chibok Communities has become recurrent with attendant serious loss of lives and properties. We as a people have been calling for serious governmental attention to tame the activities of the terrorists in the North East region, but have not seen appreciable efforts from the side of Government to ensure lives and properties are saved.

“On the eve of Christmas, our key farming Community of Pemi was attacked, in which we lost 7 lives and 2 abducted till date, with Churches, and many houses raised down by the assailants – Terrorists. This happened in less than 3 weeks within which Takulashi village was attacked where 13 people were killed, 9 people were abducted, 53 houses, 2 churches and 4 vehicles burnt down.

“We demand for adequate response from the President of Nigeria, President Muhammadu Buhkari, who is the Commander in Chief of the armed forces, Federal Republic of Nigeria to act presidentially in solving the security situation in Chibok.

“We also want the world to know that, till now, we still have no update from the Nigerian Government about the situation of our remaining 112 Chibok girls still in captivity against all the promises of the government to rescue them.

“We therefore in the same vein with Dapchi school girls and Kankara School boys, demand that the remaining of our Chibok School daughters should be brought back in (the) quickest time possible.

“Over the past 6 years, our communities in Chibok LGA have been attacked 69 times with 299 deaths, many abducted aside the 122 Chibok girls still missing, destructions and lootings of our properties, more especially food stuff.

Some have been attacked over 10 times with our locals, and the few security forces ensuring the towns are not laid desolate and turned ghost towns.

As a community, we want it on record that we appreciate the sacrifices and gallantry of the few Nigerian security forces working to secure our communities, but their numerical strengths and promptness to respond and ensure extermination of the terrorists have not met our expectation.

“We are, therefore, constrained to demands for more efforts and possible review/change in the strategy (and) complete change of approach in the prosecution of the war on terror. Having spent this long time with less results of the deliverables, there may be the need to ensure (a) complete overhaul of the security architecture to ensure we (achieve) attach timelines on our deliverables of securing the people and their properties.

“We are 100% agrarian communities with nearly zero government presence in terms of social amenities. We are farming against all odds to survive, but each year, during peak harvest period, we do experience escalation of terrorism on our people and we have had enough.

“We are calling on the government like never before, to ensure our people are protected, our properties saved. We cannot be farming against threats to our lives only for the insurgent to freely come and loot our agricultural commodities.”

COVID-19: Ondo govt replies CAN on cross over vigil, vows sanctions for violators of protocols