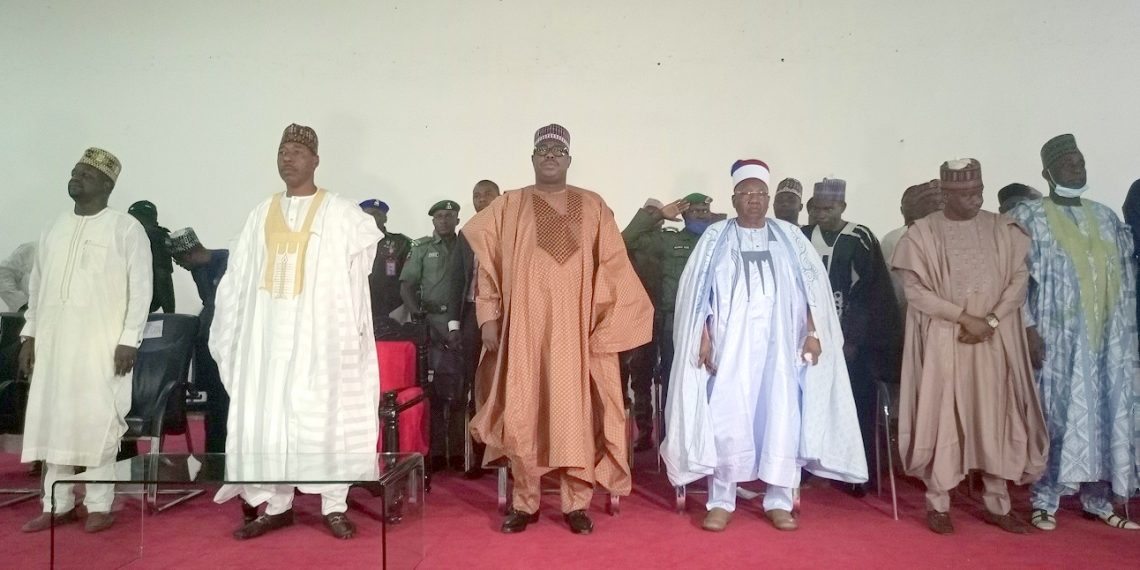 Governor Zulum of Borno state and others.

The governor said the would-be protesters were being paid to stage a protest in the state to condemn the activities of the military.

The governor of Borno State, Babagana Zulum, has disclosed that he has received credible intelligence of a planned sponsored protest in the state and has instructed security agencies to ‘crush’ any such plans.

The governor said the would-be protesters were being paid to stage a protest in the state to condemn the activities of the military.

The governor said he has ordered the security to “investigate the matter to its logical conclusion and bring all involved to book.”

Governor Zulum said this at a stakeholders engagement held in Maiduguri at the instance of the federal minister of agriculture, Baba Shehuri, where the #EndSARS protests were discussed.

Borno State, troubled by Boko Haram, did not witness any #EndSARS protest, nor witness the looting and mass destruction of properties by hooldums who took advantage of the #EndSARS protest in many other states.

Governor Zulum, who commended the Borno youth for “not participating in the meaningless protest that was hijacked by hoodlums” said his administration would not tolerate any protest that would threaten the fragile security in the state.

The governor said he has instructed the security forces to “crush any plan to stage any protest” in Borno.

“It is on record that the protest against the forced use of helmet by operatives of military Joint Task Force in 2009 led to what we have as Boko Haram today,” he said.

“Therefore, under no circumstances will I allow any protest to hold in Borno State. I have instructed the security to crush anybody with such an evil intention.

“Only this afternoon did I receive a piece of obnoxious information that some unscrupulous elements from outside the state have arrived here trying to persuade our youth to embark on a protest. We have arrested them and the matter will be investigated to finality.”

Earlier, the minister informed the large gathering of Borno stakeholders that the president appreciates the people of Borno State for their support.

The minister said the president also appreciated the conduct of the people, especially during the recent weeks.

He said the president was happy with the Borno State governor’s handling of COVID-19 palliative distribution, as well as the recent distribution of N65 million cash to 3,000 women in Kalabalge local government area.

Governor Zulum had in response stated that his government has rolled out further plans to return displaced persons in most communities in the northern part of the state.

He said the state government has provided cash tokens of N20,000 to each of the 9,000 members of the Civilian-JTF, and N50,000 to each widow of their members.

The Shehu of Borno, Abubakar Garbai Elkanemi, also commended the president for the support his government has shown to the state.

Temporary relief for Diezani as court turns down arrest warrant