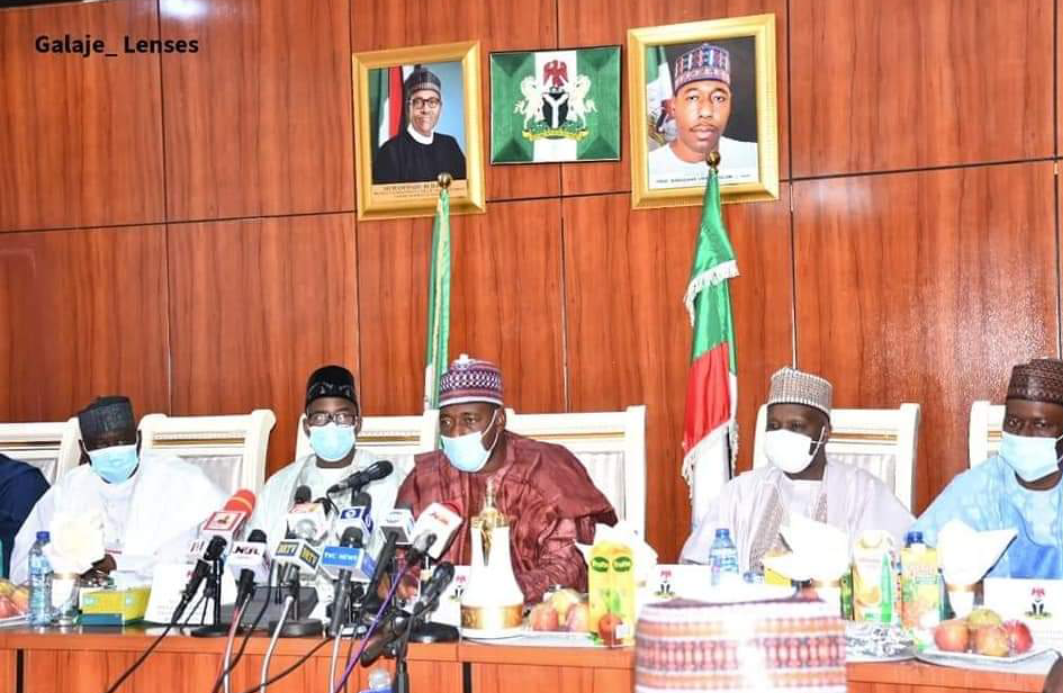 North East governors at the meeting

State governors in Northeast Nigeria on Saturday called on the federal government to properly arm the Nigerian police so it can assist the military to defeat the Boko Haram extremists.

The governors said this during their second subregional meeting in Maiduguri, the capital of Borno State.

The governors, comprising those of Adamawa, Bauchi, Borno, Gombe, Taraba and Yobe states, had earlier this year agreed to form a regional.body to be known as of North East Governors’ Forum. Their first meeting held in March this year, in Gombe State, where they the discussed common challenges confronting their region.

Due to the new coronavirus pandemic, the forum could not hold it’s quarterly meeting until now.

During the Maiduguri meeting, held behind closed doors, the governors reportedly discussed the challenges facing the sub-region after which they issued a communique.

In the 10-point Communique, issued late Saturday night, the governors commended the federal government’s fight against Boko Haram insurgency with a call for the armed forces to “intensify effort to secure hard-to-reach areas in the region and ensure safe access to farmlands.”

The forum also “called on the Federal Government of Nigeria to ensure the deployment of state of the art military hardware to the region.”

They recommended “that the manpower deficit in the Nigerian Armed Forces should be bridged by allowing the Police to carry state of the art weapons where necessary.”

They also suggested that the police should be equipped with strategic equipment like high-velocity tear gas, trackers and Armoured Personnel Carriers (APC).

As a way of addressing the remote cause of the Boko Haram insurgency, the forum implored the Federal Ministry of Water Resources to double its commitment “to recharging the Lake Chad from National water bodies and strengthen the river basins in the sub-region.”

The governors also pledged a united front towards fostering regional integration, growth and development “especially in exploitation of its oil and gas potentials, mineral resources, agriculture and industrialization.

The governors called on the federal government to revoke selected roads contracts awarded by the federal ministry of works for years without progress and re-award same to more competent contractors to ensure timely execution.

They also called on the federal government to ensure local content in the execution of the Mambila Hydroelectric power project and other programmes of the North East Development Commission to ensure synergy with state governments.

The forum said it supported the management and board of the North East Development Commission and agreed to work together in producing a comprehensive strategic Master Plan for the region that will ensure sustainable development.

On the Almajiri (street children) system, the governors said they are in total support of the federal government’s plan in transforming the system “to strengthen both Islamic and western education as well as stop street begging and prevalence of out of school children in the region as agreed by the Northern Governors.”

The communique indicated that the Governor of Borno State, Babagana Zulum, has been nominated and endorsed as the forum’s chairman for a period, during which their headquarters will remain in Maiduguri, Borno State.

The forum’s next meeting is to be held on November 7, 2020, in Yola, Adamawa State