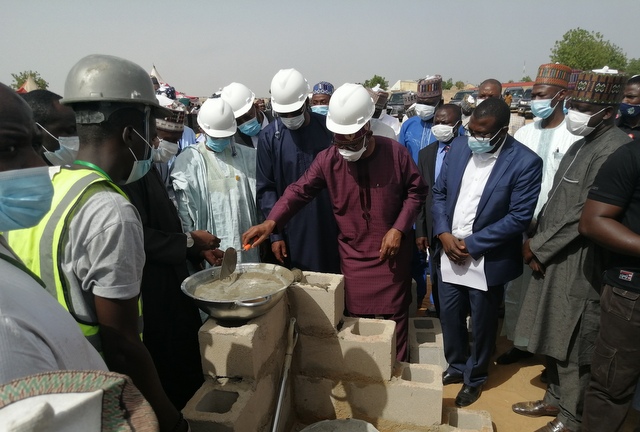 The Nigerian National Petroleum Corporation (NNPC), on Saturday, performed a foundation-laying ceremony for the construction of a 200-bed Emergency and Infectious Disease Hospital in Maiduguri, Borno State.

The foundation block was ceremonially laid by the Minister of State for Health, Olorunibe Mamora, and the NNPC Group Managing Director (GMD), Mele Kyari.

The event was also attended by the Borno State Governor, Babagana Zulum.

Speaking at the site of the hospital, along the Kano-Maiduguri highway, the NNPC GMD explained that the proposed hospital was strategically sited in Borno due to the existing security challenges that have been aggravated by the coronavirus.

The NNPC boss said further that when the hospital is completed, the corporation would also provide “medical facilities, logistics, and support to patients.”

The GMD, who is an indigene of Borno State, said that siting the hospital in Borno should not be seen as a favour done the state, even as he added that similar hospital is being built in 12 other states, spread across the six geopolitical zones of the country.

“It is not really a favour to the state; it is something that really needs to be done, and something we are challenged to do,” he said.

According to Mr Kyari, NNPC was acting on the directive of President Muhammadu Buhari whom he said: “had particularly told NNPC to pay attention to Borno by doing everything possible to make sure that there are energy, security, and exploration activities in the state.”

“And we are focused on delivering on all those in Borno state,” he said.

The minister of state for health, who represented the Secretary to the Government of the Federation, Boss Mustapha, said the federal government called for the establishment of such hospital “as part of efforts to combat COVID-19 in the country.”

He said the project was “designed to complement and strengthen the country’s national healthcare delivery facilities.”

He said though the COVID-19 has destabilised the social, cultural, religious, economic, and health system, the pandemic also came as a blessing for the country.

“At the end of pandemic there would be many landmarks of infrastructural development across the country; and the establishment of this infectious diseases hospital would serve as a landmark achievement for the northeast.”

He said the N21 billion project, “funded by the Federal Government of Nigeria through the NNPC, would be executed in 12 states in the six geopolitical zones of the country.”

He added that the Presidential Task Force on Prevention of COVID-19, head by the SGF, Boss Mustapha, “is committed to supporting the state to fight coronavirus pandemic.

Governor Zulum had earlier lauded the NNPC and its collaborating partners for helping to ease the difficulties faced by residents.

“What we’re seeing today is part of the institutional capacity building measures envisaged by President Muhammadu Buhari and delivered by the NNPC and its allied organizations in the oil sector”.

“The selection of Maiduguri for the building the gigantic health outfit is quite apt because of its strategic location within the geopolitical zones and for it being the epicenter of humanitarian crises resulting from the insurgency.”

Mr Zulum noted that Borno is already battling with the pandemic of Lassa fever and others even before the advent of COVID-19.

“Borno State had lost about 201 health centers as a result of the destruction of the Boko Haram insurgency.

“As you have seen, about 60 percent of the populations are now residing in the state capital and therefore, these measures will go an along way in reducing congestion in different hospitals,” he said.

Coronavirus: About 4 in 10 Nigerians lost their jobs in April — NBS