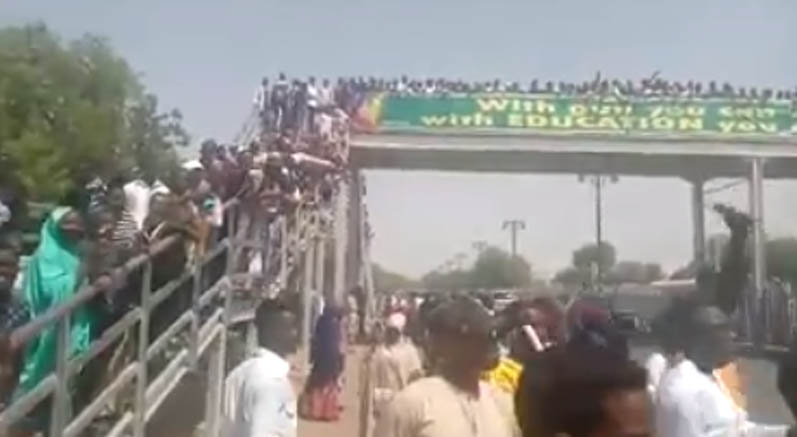 Protesters on Wednesday booed President Muhammadu Buhari when he travelled to Maiduguri to “sympathise” over recent Boko Haram attacks.

A video circulated on social media showed hundreds of protesters on the road while the president’s convoy drove past.

“Buhari, we don’t like you. We don’t want you anymore,” the protesters chanted in Hausa.

Borno State, including Maiduguri, is a stronghold of Mr Buhari’s APC which overwhelmingly won the elections in the state in 2015 and 2019.

The worsening security situation in the state appears, however, to be turning the residents against the president who enjoyed tremendous support there.

Mr Buhari travelled to the state directly from Addis Ababa where he went for an African Union programme.

“He is paying a sympathy visit to the government and people of Borno following the recent horrific incident in which BH terrorists killed several travelers,” Garba Shehu, Mr Buhari’s spokesperson wrote.

Mr Shehu made reference to the recent Boko Haram attack in Auno where over 30 travellers were killed by Boko Haram after their vehicles were stopped from entering Maiduguri after 5:00 p.m by soldiers.

PREMIUM TIMES reported how the Borno State Governor, Babagana Zulum, blamed the military for the attack.

“We have made repeated plea to the military to re-establish a base in Auno since it is one of the flashpoints of the Boko Haram, but nothing has been done to that effect,” the governor said.

On Wednesday, the president was accompanied by the defence minister, the National Security Adviser, the governors of Imo and Cross River states, Hope Uzodimma and Ben Ayade, and other federal government officials.

Mr Buhari was immediately driven into Maiduguri town amidst tight security mounted by the army and the police.

During the visit, Mr Buhari told the Maiduguri residents that his government was committed to improving the security in Borno State.

“I assure you that improvement in security will be pursued vigorously,” Mr Buhari was quoted as saying by Garba Shehu.

More proactive and decisive measures are to be taken by the Federal Government to put an end to the Boko Haram menace in the country once and for all.

President Muhammadu Buhari who gave the assurance in Maiduguri during a sympathy visit however maintained that intelligence sharing and synergy between law enforcement agencies and the civil populace are critical towards achieving the objectives.

“I assure you that improvement in security will be pursued vigorously. The military will work harder and strategise with tactics to deal with the insurgents. This is however not possible without good intelligence and cooperation with local community leaders.

“I want to call on the leadership at various levels to cooperate with law enforcement agencies and let us deny Boko Haram access to our loyal citizens,” the President said.

President Buhari, who was at the palace of the Shehu of Borno, His Royal Highness Abubakar Ibn Umar Gabai, accompanied by the state Governor, Babagana Umara Zulum, sympathised with him and other victims of the attack, prayed for the repose of the soul of the victims.

In his remarks, Governor Zulum thanked the President for identifying with the state in these trying times. He praised the efforts of the military so far, wondering why some people would be comparing the security situation now with what obtained before the Buhari administration came on board:
“Roads were closed, there were sporadic bombings everywhere even within the metropolis. Close to 20 local government areas were under Boko Haram. We are surprised that there seems to be resurgence in 2019.”

He tasked the military to borrow from their successes especially between 2015 and 2017, take the battle to the insurgents and push them to the fringes of Lake Chad.

He also urged the security agencies to be patient with the civilian populace and give opportunities to the Internally Displaced Persons to access their communities in order to return to their occupations.