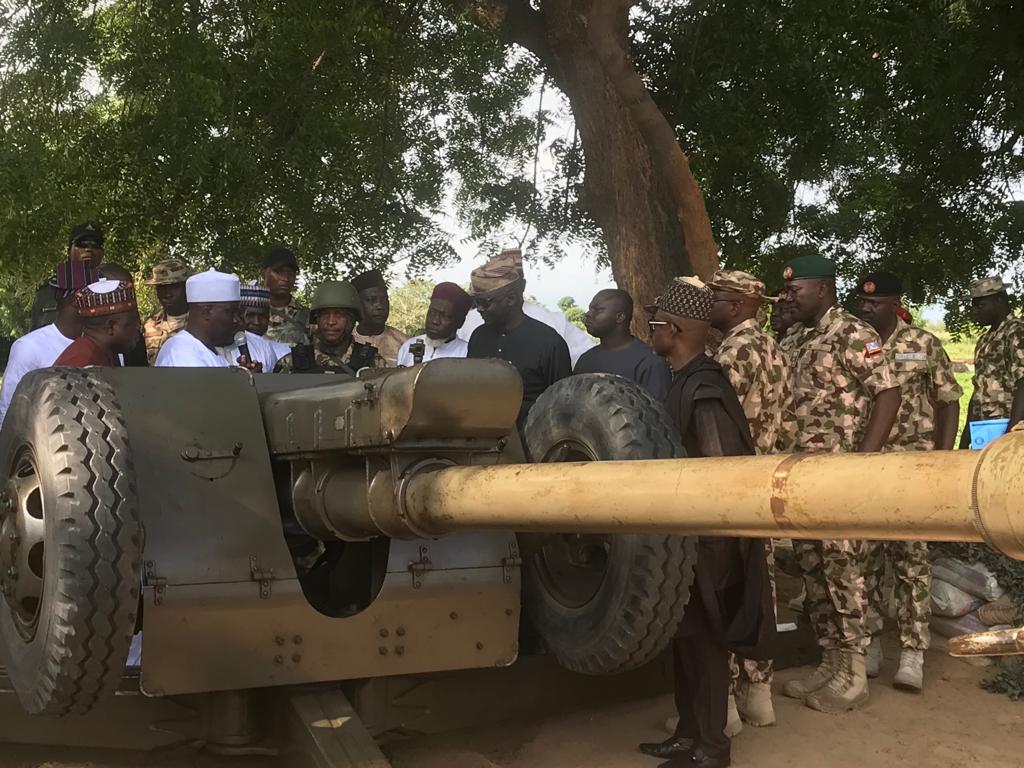 The National Assembly joint committee on the army on Thursday, in Maiduguri, the Borno state capital, expressed satisfaction with troops’ ongoing fight against Boko Haram.

The committee’s visit to Borno comes at a time soldiers are being killed during attacks by the Boko Haram insurgents.

The NASS committee, led by Borno senator and former Senate Majority leader, Ali Ndume, arrived Maiduguri Thursday afternoon after which they met with some of the troops on the frontline.

The joint committee later had a closed-door meeting with the Theater Commander, Operation Lafiya Dole, Olusegun Adeniyi, and his lieutenants who reportedly briefed the federal lawmakers on the ongoing operation.

At the end of the meeting, Mr Ndume, who is the Senate Committee Chairman on Army, and his House of Rep’s counterpart, Abdulrazaq Namdas, informed journalists at a joint briefing that they were pleased with troops’ commitment to end the Boko Haram war.

Mr Ndume said they were in Borno as part of their oversight responsibilities to, specifically, interface with the troops with a view to finding out their challenges and what they need to effectively end the insurgency.

“The main reason the joint committee on the army is here is in line with our collective decision that there is a need for us to see things for ourselves and have a first-hand appreciation of what is going on here in Borno State, ” he said.

“Now that the issue of the insurgency is resurfacing in this part of the North-east, it is the best time to visit especially as it coincides with the time the nation’s budget is being presented by Mr President.

“This affords us golden opportunity to sit and have a discussion with the officers and men on ground so that we can know what needs to be done for the troops immediately can be captured in the next budget.”

He said all the interaction the committee had with the men on the ground was “very useful.”

“We have discussed with the troops; but as you know, our deliberations cannot be made public because it pertains security.

“But I can assure you that the new leadership of the Theater and their demonstrated determination to this war is quite inspiring.”

Mr Namdas, who is the chairman House of Reps committee on the army, said their interaction with the Theater Commander has inspired their hopes “that with little support the troops will deliver.”

“The Commander and his troops are committed and very much ready to take on the fight and they are committed to it,” he said. “All they need is to see our support and we have given them our words that we are going to give all the support that they need because commitment is key.”

Earlier, while receiving the NASS members, the Theater Commander, Mr Adeniyi, a Major General, told the legislators that all that he needs to end the Boko Haram war is equipment and firearms.

“Give me the required equipment and Boko Haram would become history in three months,” he said.

The NASS committee on army is expected to continue its tour of troops location around Maiduguri, tomorrow.