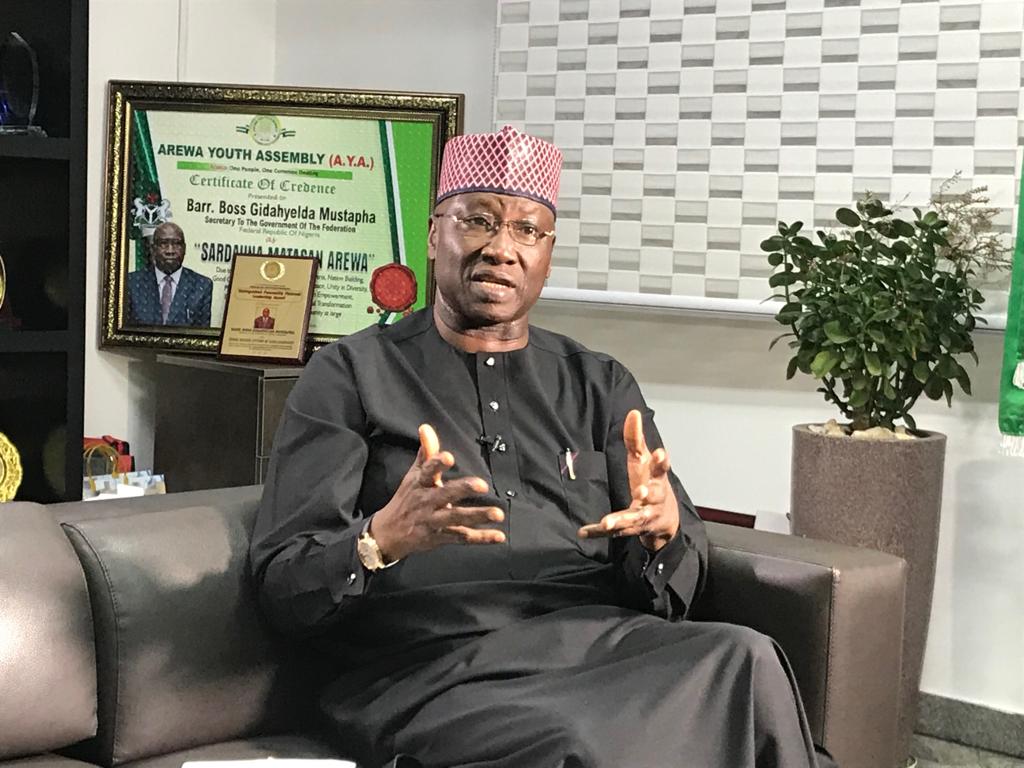 The Secretary to the Government of the Federation (SGF), Boss Mustapha, and the minister of the Federal Capital Territory (FCT), Mohammed Bello, have moved to reconcile aggrieved members of the All Progressives Congress (APC) in Adamawa State.

Both Messrs Mustapha and Bello hail from the north-eastern state.

The ruling APC lost the governorship election and legislative seats in the state during the general elections in February and March to the opposition Peoples Democratic Party (PDP).

The loss was largely attributed to internal wrangling within the party.

The peace move, which was initiated by the North-east zonal chairman of the party, Mustapha Salihu, brought together aggrieved members of the party who agreed to bury the hatchet.

As part of the outcome of the peace initiative, the stakeholders agreed to constitute a 39- member Central Steering Committee to oversee affairs of the party in Adamawa State and reposition it for future electoral victory.

The committee, which is headed by Abdulrahman Adamu, has Messrs Mustapha and Bello as co-chairmen.

The steering committee is charged with the responsibility of reconciling all aggrieved aspirants /candidates that vied for positions during the 2019 general election.

The committee is also charged with the task of developing a programme of action to strengthen the APC in Adamawa, as well as propose modalities that ensure free and fair primaries ahead of the coming local government election and future elections in the state.

A document of the committee’s terms of reference seen by our reporter also shows that its additional mandate is to propose ways and means of raising funds to run the affairs of the party in Adamawa State.

“To develop an effective media and public enlightenment programme for repositioning the party to its winning ways in the state.

“To co-ordinate and support the various election petitions by the party at various tribunals and courts.

“To carry out any other functions as may be directed by the National Work Committee of the APC.”

Other members of the committee include immediate past governor of the state, Mohammed Jibrilla (Bindow); a former EFCC chairman, Nuhu Ribadu; Dahiru Bobbo; Jonathan Zwingina; Halilu Ahmed (Modi); Ahmed Barata, among many others.

How NEC will work with Buhari’s new economic advisers – Osinbajo