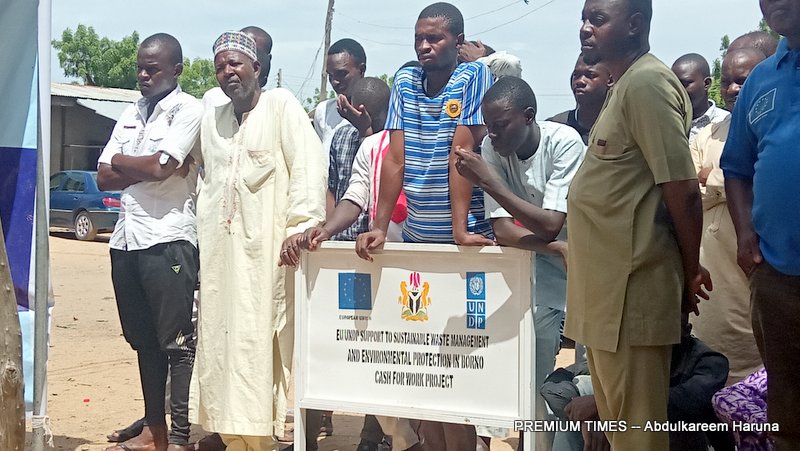 Some 575 internally displaced persons (IDPs) and widows in Maiduguri, the Borno state capital, now get N40,000 as monthly allowance for keeping their neighbourhoods clean, officials of the United Nations Development Programme (UNDP) have said.

As the rainy season sets in, Maiduguri, a town hosting more than half of the people internally displaced by the ongoing Boko Haram in the state, is usually challenged with various forms of filth-related communicable diseases.

The state government-owned environmental sanitation agency has been overwhelmed by the rising population of IDPs.

It was in this regard that the UNDP under its Sustainable Waste Management and Environmental Protection programme is encouraging the residents to keep their environment clean in exchange for cash token.

Yoshiaki Noguchi, UNDP’s project management specialist, said the ‘cash for work programme’ would not only encourage environmental hygiene amongst the people but also empower them financially.

He said a total of 12,000 persons have been profiled to be engaged in various forms of the programme over a period of three years.

“In November last year, 730 beneficiaries participated in the first round of the Cash for a Work project, ” said Mr Noguchi.

“Today we are launching the second round with 575 beneficiaries to conclude the pilot phase so that we can continue with the implementation of the cash for work activities in Bama, Biu, and other communities in Maiduguri.”

Mr Noguchi said the programme, which is funded by the European Union (EU), would be jointly implemented by the Borno State Environmental Protection Agency (BOSEPA).

The desk officer for EU and other Donor Support grant programmes at the BOSEPA, Ibrahim Ville, said the programme has eased the pressure of job creation for the government of Borno state, as the 12, 000 persons profiled and shortlisted for the job were selected from among the mass of indigent persons in the state.

“For every 20 days that they will work in a month, they get N40, 000 as an allowance, which to us is way above even the minimum wage benchmark, ” he said.

“And we have also enhanced their capacity to invest the money into profit-yielding ventures after they have ended the two months program.”

He said at the end of the three years project, BOSEMAN will even become more empowered as it will take over all the working implement which include waste trucks, wheelbarrows, spades, etc for onward cleaning of the townships.

The village head of Ngomari, Zanna-Lawan Jidda, said he was elated seeing his subjects benefit from an enterprise that does not only put money in their pockets but also improve their environmental health.

“We cannot help but thank the EU people for bringing this succour to our people, ” he said.

“I can assure you that most of the beneficiaries may have never earned N40,000 cash of their own in their entire life. But here they are getting N80,000 in two months for doing nothing other than just keeping their own environment clean, which ordinarily should be our own responsibility.

One of the beneficiaries, Maryamu Daniel, a mother of five who lost her husband in the Boko Haram insurgency, said her enrolment into the Cash for Work programme” was a big blessing and relief” to her family.

“Since the death of my husband, I was left with the task of fending for the family, ” she said in tears.

“I own a little kiosk where I sell biscuits and soft drinks. My capital is not more than N15,000. But with about N80,000 coming to my account at the end of two months, I know God has answered my prayers of expanding my business and making more money to feed and pay for my kids’ school needs.”

Officials of the UNDP said the beneficiaries should not mistake the project for a jamboree, as their daily turn out to work will be digitally tracked, using their electronically chipped ID cards.