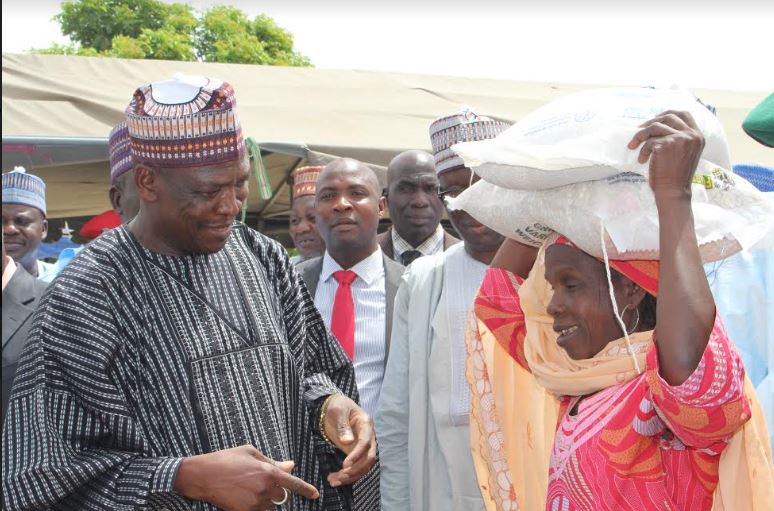 At least one million farmers who were displaced by the Boko Haram insurgency in Borno, Yobe and Adamawa states are being assisted by the United Nation’s Food and Agriculture Organization (FAO) to resume farming.

FAO on Tuesday in Maiduguri, Borno State capital, officially flagged off the distribution of assorted seeds and fertiliser to 149,730 farming households peopled by about a million male and female farmers.

Cropping season commences in full in most parts of Borno and Yobe states in June when farmers begin to mobilise to their farmlands.

Until last year, most farmlands, especially in Borno were abandoned due to the occupation of Boko Haram who had displaced millions of people from their homelands. At least 70 per cent of the displaced people are farmers, according to the FAO officials.

Sufyan Koroma, who is the country representative for FAO in Nigeria, said the farmers were selected considering their access to safe lands in their respective localities, ability to farm in the season and the scale of their vulnerability.

“The seeds being distributed by FAO have a high seeding rate per hectare and are drug, pest and disease tolerant”, said Mr Koroma who was represented at the occasion by the Maiduguri head of FAO office, Michael Oyhe.

He said FAO is bringing the intervention because it believes that “a restoration of livelihoods, particularly in agriculture, will be central for a full recovery in the region…and the rainy season a major opportunity to strengthen livelihood in the selected North-eastern states.”

FAO said its intervention becomes very crucial due to the expectation that many of the 2.9 million affected farming household in the region may be facing scarcity of food between the months of May and September this year.

The UN organisation said it needs about $31.5 million to tackle the situation, even as it worried that only about $13.2 million has so far been mobilised in its country appeal.

The Borno State Deputy Governor, Usman Durkwa, who performed the flag-off at the Farm Centre Maiduguri, commended the FAO being one of the key UN agencies that has been assisting the people of North-east Nigeria.

He said the agency has, in its agricultural transformation agenda, invested massively in agriculture the area of mechanised farming as well as stockpiled various kinds of assorted seeds for immediate deployment in all parts of the state.

Highlight of the event was the handing over of bags of assorted seeds and fertiliser to some selected farmers.

One of the beneficiaries, Haruna Hamisu, who received his package of assorted seeds expressed appreciation to the UN agency.

He said various interventions such as FAO’s were either diverted or hijacked by some officials ”who only favour those that are familiar with them.”

“We are happy that the FAO is giving farmers these important farming inputs; but on a sad note, it does not get to us the real farmers. Those of us in the hinterlands of Zabarmari in Jere local government would only hear that FAO is distributing such items, and before we could understand what is happening, we are told it is finished. So we want the FAO officials to understand our challenges.”

Mr Oyhe, earlier while addressing the benefiting farmers, asked them to report any case of official misconducts ”like asking for money in exchange for the freely distributed seeds and fertilisers to the extension offices close to them.”