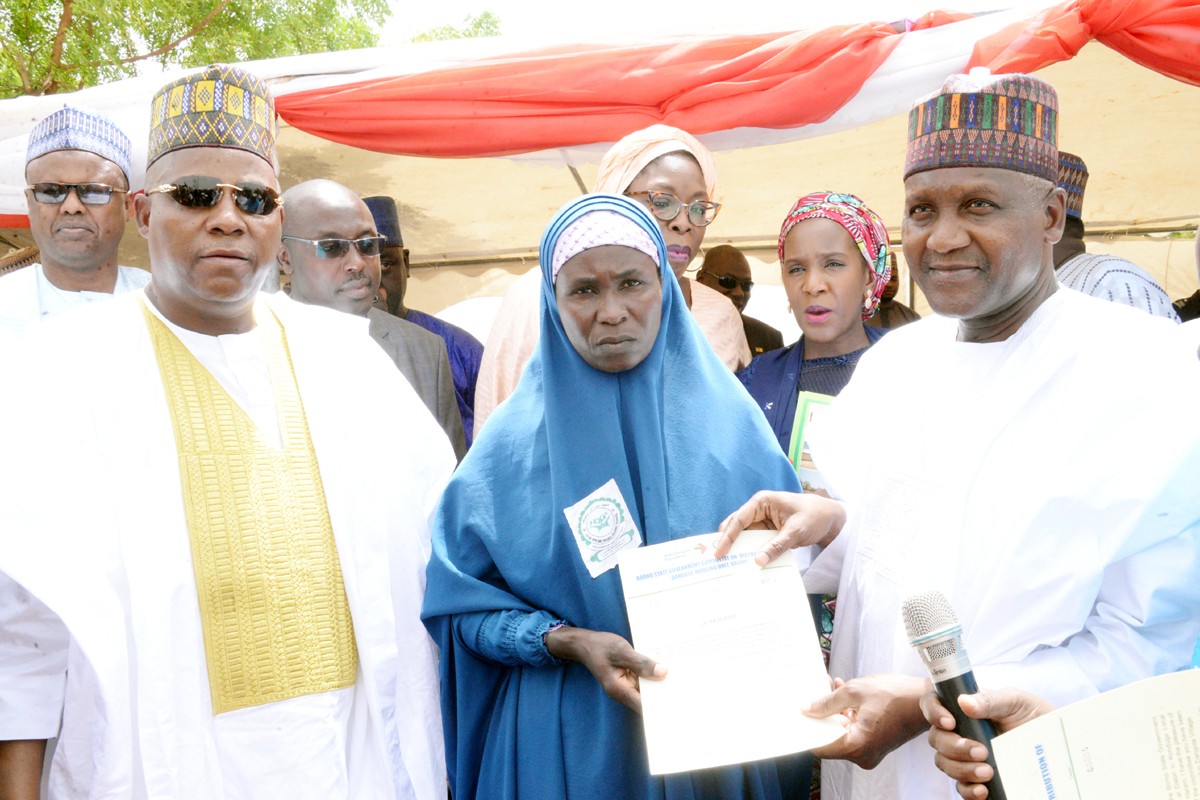 Barley two weeks after donating 150 cars to the Nigeria Police, in yet another philanthropic gesture, the Aliko Dangote Foundation Monday, launched the Dangote village built for the Internally Displaced Persons (IDPs) in Maiduguri, Borno State capital.

The Dangote village in Maiduguri is a self sufficient set of 200 housing units worth N2 billion, with school, hospital, irrigation farms and poultry farms among others, to enable the occupants eke livelyhood. Dangote also gave each of the beneficiaries N100,000 to start a new life.

Speaking at the commissioning ceremony, chairman of the Aliko Dangote Foundation, Aliko Dangote said about N7 billion has been donated to support displaced persons affected by the Boko Haram crisis in the North-east.

Aside the N100,000 to start a new life, Dangote also pledged that the Foundation will take care of teachers’ emolument for five years and as well share in the burden of the ongoing educational revolution launched by the state governor.

Mr Dangote commended the governor, Kashim Shettima, saying he is able to run the state efficiently and pay salaries despite the security challenges.

A visibly elated Mr Shettima said the intervention was unprecedented and gargantuan by a single company, describing the Aliko Dangote Foundation as the fourth arm of government in the state.

Speaking at the commissioning ceremony, Mr Shettima reminded that the Dangote Group is the single largest employer of labour outside government in Nigeria.

“In every clime and in every dispensation, there are three layers of governments: the executive, the legislature and the judiciary. I dear to add that the fourth layer in Borno State is the Aliko Dangote Foundation. For the past seven years the Foundation has been consistent and hearkening to the yearnings and aspirations of people of the state,” the governor said.

He said the Dangote Village provided by the Foundation, though very massive, is a ‘tip of the iceberg’ compared to what the Foundation has done to support humanitarian relief in the troubled region.

“When Aliko Dangote came in 2016, he quickly pledged N2billion. We requested that half of the money should be used to supplying building materials and lo and behold within the span of two weeks all the materials were ready,” he added.

He said it was the support from the Foundation that enabled most of the displaced and malnourished victims of Boko Haram insurgency to survive.
According to the governor, it was crucial to acknowledge the generosity of Aliko Dangote, adding that as far as he was concerned Mr. Dangote is the world’s biggest philanthropist.

He revealed that most of the beneficiaries are widows and children.
“We call it Dangote village because it is a self-sustaining community with their own schools, clinics, mosques and livelihood,” he added.

He thanked all the donors, and added that Borno State is now opened for investors, saying it is more peaceful than Lagos and Abuja.

Speaking also, Baba Umara said 95 per cent of the beneficiaries were widows whose husbands were killed by the Boko Haram terrorists.

Mr Umara, a professor, is the chairman of the distribution committee for the new Dangote village.

He said the criterion for allocating a flat to the beneficiaries is to be a widow and having no fewer than five children.

While commending the president of the Dangote Group, he said the reconstruction effort was now on and that the infrastructural deficit was still huge.

He said the EU, UN and World Bank had estimated that the infrastructural deficit caused by the insurgency in Borno alone was around $6.9 billion.

He expressed optimism that with the kind of support from the likes of Aliko Dangote Foundation, the state will bounce back to normal before the year 2020.

In her remarks, the chairperson of the State Emergency Management Agency,Ya Bawa Kolo, expressed appreciation to the Foundation on behalf of the Internally Displaced Persons.

While commending the Foundation, she assured that only deserving persons are beneficiaries.

Ten beneficiaries were selected for symbolic presentation of certificates of occupancy.

Speaking, Managing Director/CEO of Aliko Dangote Foundation, Zouera Youssoufou, said the foundation would not rest on its oars to support the victims of insurgency.

She said the philanthropic exercise was meant to complement the effort of both the state and the federal government.

“We are supporting government reconstruction and rehabilitation effort,” she said.

Hajara Ibrahim, 26, a widow, who is also one of the beneficiaries, commended Mr. Dangote, adding that since her husband, Sani Abubakar, was killed a year ago by the Boko Haram terrorists, it has been very difficult to cater for the needs of her three children and six orphans.

Another beneficiary, Yagana MAdamu, 39, said the new village provided by Dangote will help her and her seven children start life again.

The husbands of the two women were both members of the Multi National Joint Task Force(MJTF).

After the ceremony, the governor, Mr. Dangote and their entourage toured the 200 housing units to assess the facilities.

I am not going to America — Atiku