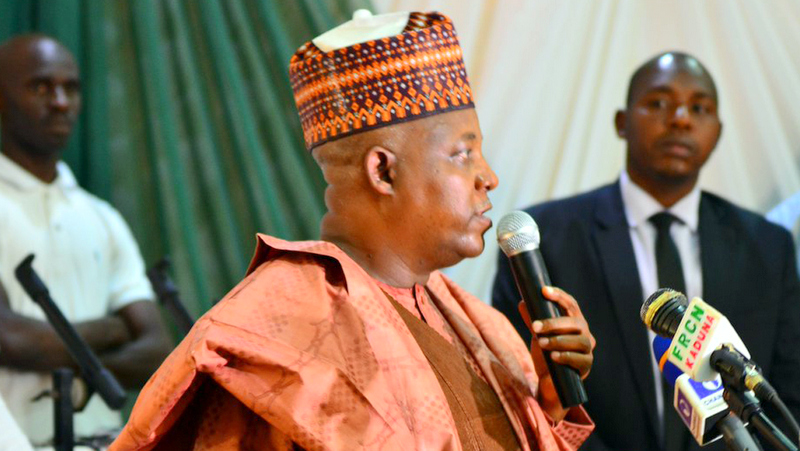 The Borno State government on Saturday, inducted a total of 2,900 youth volunteer force as members of a newly created Neighbourhood Watch, whose role includes sniffing out drug abusers and perpetrators of other related crimes.

The Neighbourhood Watch (N-Watch) is a replica of the Civilian Joint Task Force (CJTF) that came into force in 2013 as a volunteer group helping the military to combat Boko Haram.

Borno State governor, Kashim Shettima, said the N-Watch will also compliment the existing synergy between the CJTF and the military in guarding communities against infiltration of Boko Haram and also in combating societal vices like drugs abuses.

Mr Shettima, who spoke during the launching of the new security outfit said the 2,900 youths would be deployed to the 27 wards within the two local government areas of Maiduguri and Jere, forms the state capital.

The governor said the formation of N-Watch is part of his community policing initiatives which he said has yielded positive result in the past when it was tested with the Civilian-JTF.

“Since the establishment of the Civilian-JTF there has been a tremendous improvement in the relationship between the civilian populace and the armed forces which use to be very frosty,” the governor said.

“I want to pay tribute to all our gallant officers and men who have paid the supreme sacrifices for us to have peace in this part of the world” he said, adding that the tribute also was for CJTF, many of whom have died, paying the far reaching sacrifice for the state to have peace.

“The current set of Neighbourhood Watchers are backed by the law and we will deploy them to their immediate neighbourhoods to safeguard lives and properties and also to ensure the issues of drugs abuse are addressed frontally”.

He called on the youth to exercise utmost caution and avoid taking laws into their hands while discharging their responsibility.

“Any perpetrator arrested by the N-Watchers are to be handed over to the nearest police station for onward prosecution”, he said.

Earlier, the Attorney General and commissioner for Justice, Kaka Shehu, a Barrister, whose office coordinates the activities of all volunteer security outfits in the state, said the N-Watch is duly backed by a legislation from the state House of Assembly.

He said the roles of the neighbourhood watch isn’t that different from that of the existing Civilian-JTF.

“The Neighbourhood Watch is more or less the baby of the Civilian-JTF,” the Attorney General said.

“The members of the N-Watch were drawn from the 15 wards of the Maiduguri metropolitan council and 12-wards of Jere local government area.

“They are also members of the Civilian JTF that are untrained. We feel training them will add value, and that informed the decision of this government to train them and form the neighbourhood watch”.

“The Neighbourhood Watch is backed by Vigilante and Youth Empowerment Law of Borno State. The law came into force after the advent of the Civilian-JTF which then, (was) a spontaneous reaction as a defence mechanism.

“As a responsible government, an all-inclusive security council meeting was called to checkmate the new baby that was born.

“After a robust meeting with the new Civilian-JTF, we assisted them to form their command structures, and then designed their method of reporting, screening and that gave birth to the Borno Youth Empowerment Scheme.

“Later we transmitted a proposed bill to the State Assembly, which was passed and then gave birth to the vigilante and Youth Empowerment Agency Law”.

He said the 2,900 members of the Neighbourhood Watch represents 100 person from each of the 27 combined wards of Maiduguri and Jere, even larger wards like Lamisila-Jabarmari and Maisandari got 200 volunteers.

Mr Shehu said the Neighbourhood Watch has the powers to arrest but not to prosecute or mete any form of punitive or disciplinary measures on any arrested offender.

Highlight of the event was the distribution of patrol vehicles to each of the 27 wards.