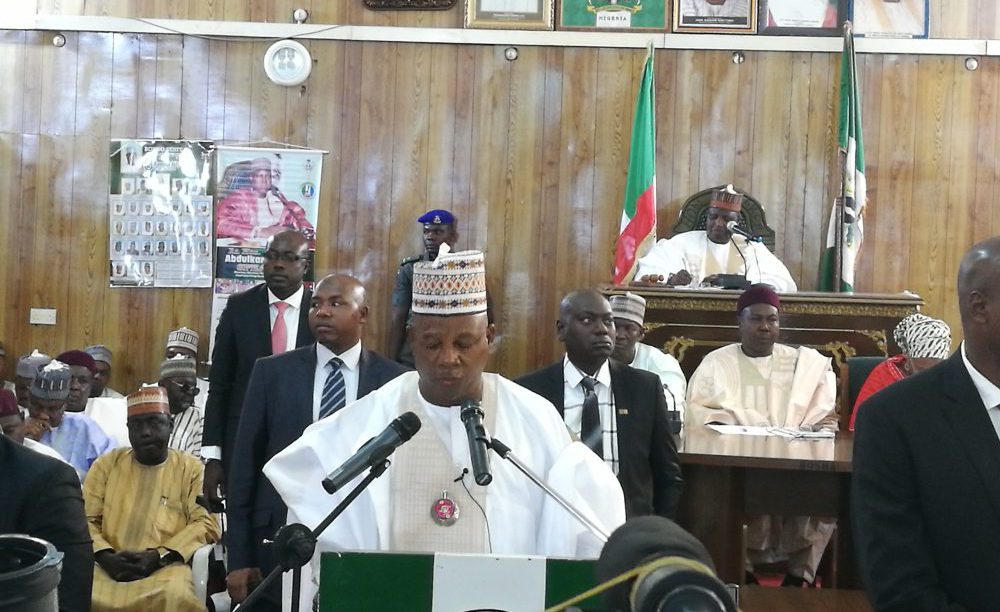 Governor of Borno state, Kashim Shettima, on Thursday presenting the budget of N170 billion for the 2018 fiscal year.

The Governor of Borno state, Kashim Shettima, on Thursday presented a budget of N170 billion for the 2018 fiscal year.

The state’s education sector got the highest allocation of N26 billion.

The proposed budget is lower than the current 2017 budget by over N13 billion which represents 7.38 percent reduction.

Mr. Shettima, who presented the budget before the state House of Assembly, christened the new fiscal bill as Budget of Resettlement and Empowerment.

He said the main thrust of the proposed budget would be the welfare of the IDPs especially their resettlement and restoration of their dignity which has been eroded by nearly a decade of ongoing Boko Haram insurgency.

In the sectoral breakdown, the education sector takes the lion share of N26 billion which represents 15 percentage of the total figure.

The governor said his administration would focus on massive rural and township road reconstruction in the coming year.

“We are going to make all these projects possible in the first six months of 2018.”

The state attorney general and commissioner for justice, Kaka Shehu Lawan, said the basis for reducing the proposed budget by N13 billion was informed by the imperatives of the state as well as to avoid taking unnecessary loans.

“We want a realistic budget that would be implementable,” he said.

The Speaker of the Borno state House of Assembly, Abdulkarim Lawan, commended the state government for implementing the 2017 budget significantly even as he promised a speedy passage of the budget to enable the government commence it’s new financial year on time.