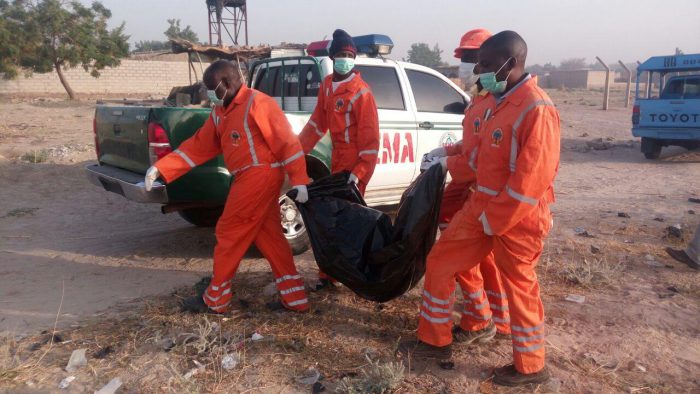 Explosion used to illustrate the story.

A deafening explosion has occurred near Giwa barracks area of Maiduguri, the Borno State capital.

An official confirmed that two people were killed in the explosion.

This is coming three days after two suicide bombers attacked a crowded suburb of Maiduguri leaving at least 18 persons dead and 29 injured.

Today’s blast went off at about 6.50 a.m. Saturday morning.

Residents cringed in fear as the thunderous blast reverberated over the city.

PREMIUM TIMES’ quick checks indicate that the blast came from the Giwa barracks axis of the city.

Security trucks belonging to the Nigeria military and that of the Civillian-JTF were sighted coming from the Giwa barracks road at top speed with their headlamps on.

A trader, Umar Ali, residing close to the barracks said the explosion went off after the suicide bomber was gunned down.

“We learnt that it was soldiers that shot a suspected female suicide bomber who was coming near a military post near the barracks,” Mr. Ali said.

“It was after she was gunned down that the explosions went off, but it was massive bomb. Thank God no one was hurt.”

No official statement has been issued from either the police or the military as at the time of filing this report.

However, the chairman of the State Emergency Management Agency, SEMA, Satomi Ahmed, told journalists that two people were killed including the suicide bomber.

“A female suicide bomber was shot near the Army Giwa Barracks. During the process, a teenage boy was affected by the explosion,” he said.