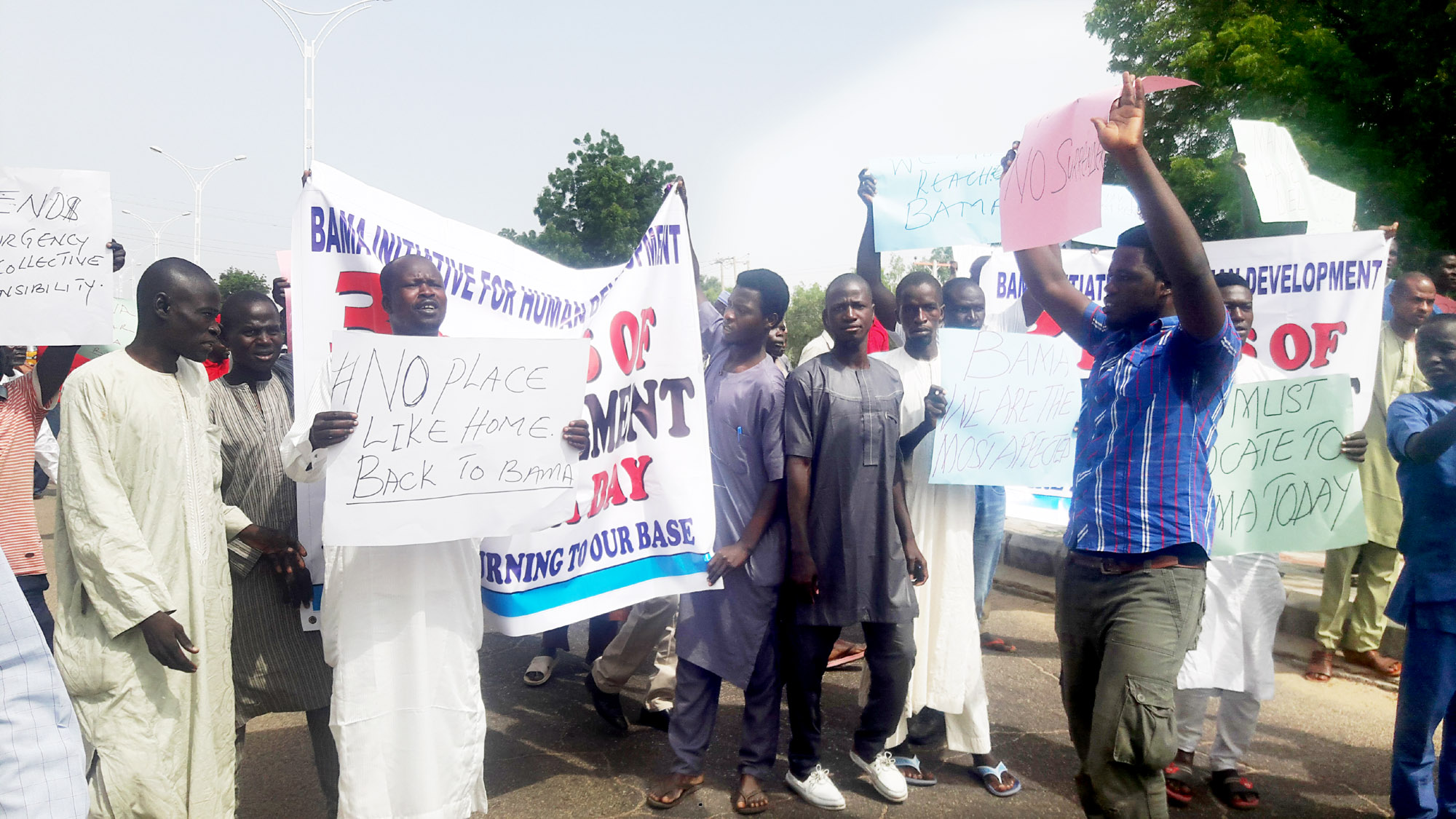 The Bama Initiative for Human Development, an NGO, on Sunday in Maiduguri staged a peaceful demonstration demanding the return of Internally Displaced Persons (IDPs) to their respective communities in Bama.

The group’s chairman, Muhammad Hassan, said that the IDPs would want to return and continue their normal activities in view of the prevailing peace in the state.

Mr.  Hassan noted that about 70 per cent of the reconstruction and rehabilitation projects had been completed in the area, saying that they were tired of living as displaced persons.

“We are in Maiduguri for more than three years without meaningful means of livelihoods. The condition of our people is pathetic.

“The elongation in the process of returning displaced persons to their homes is moving at a snail pace and exposed them to unbearable conditions.

“We could no longer send our children to school; many have died of hunger and starvation. Most of us live in host communities and no one is supporting us,” Mr.  Hassan stated.

He said that most of them were traumatised worsened by serious neglect and poor living condition, adding that they are ready to trek back to Bama.

The police, however, stopped the demonstrators from embarking on the trek and urged them to drop the idea because of safety.

Damian Chukwu, the Police Commissioner in the state, said that the group had not notified the command over their planned return to Bama.

He advised the IDPs to dialogue with the state government and other stakeholders over their demand so that adequate preparations would be made.

“The police have a duty to protect you and we will not allow you to gather people and expose them to danger in the name of home return.

“Also, there is massive reconstruction and rehabilitation works going on in the town, executed by the Federal and State Government under the Bama Initiative.

“We will not allow you to go because of your safety, you better go back and wait for the time when government will permit your return to the town,” he said.

In his reaction, Governor Kashim Shettima urged the IDPs to cooperate with government to fast-track the completion of rehabilitation projects in the town.

Isa Gusau, the Special Adviser to the Governor, Communication and Media Strategy, made this known in a statement issued in Maiduguri.

“It is to the government’s advantage if IDPs return home because their return will lessen economic burden of supporting them as displaced persons.

“The greatest wish of the governor is the safe and dignified return of all IDPs to their communities. Much as he wants the IDPs to return, he is also concerned about their safety.

“Gov. Shettima is consistently committed to the ongoing rebuilding of private homes, police stations, hospitals, schools, water facilities, markets, council secretariats and other essential services in communities across 15 local government areas of the state,’’ he said.

Mr. Gusau explained that government had constructed 20,000 housing units in Bama and provided modern health facilities, schools and police stations in the area.

He added that the federal government was currently training a special Anti-Terrorism Squad and Civilian Joint Task Force (CJTF) to be deployed to the town under the Bama Initiative.

The spokesman added that the special squad and the agro-rangers, specifically trained to secure farmers in their farmlands would replace the military.

“We have to ensure that there is full return of civil security before IDPs can return.

“The governor encourages safe and dignified return only after putting the right things in place,” Mr. Gusau said.

According to him, the state government had re-built houses and re-settled displaced persons in parts of Kaga, Konduga and Gwoza Local Government Areas of the state.

The News Agency of Nigeria reports that thousands of persons were forced to flee their homes when the Boko Haram insurgents sacked Bama town in 2014.

Hundreds of people were killed, maimed or abducted while the entire structures in the town were razed by the insurgents.
(NAN)