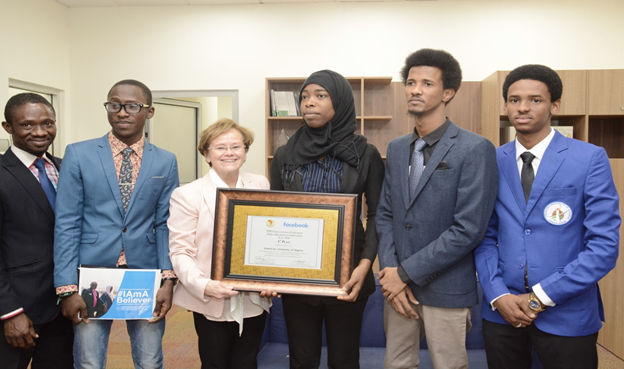 The AUN beat 32 other universities in the continent to clinch the top prize during the competition, which was held in Accra, Ghana.

Receiving the students, AUN’s President, Margee Ensign, commended them for exhibiting exceptional creativity, intelligence and hard work, virtues she said made the team stand out during the competition.

“All of us at AUN are so proud of our students, and of the faculty who assisted them, in winning this important international award,” said Ms. Ensign.

“The creativity, intelligence, hard work, and vision which went into this project and which promotes inter-religious understanding and tolerance, reflect what is best about the American University of Nigeria. May we all continue to build a more thoughtful, peaceful, and just world together.”

The AUN received $5,000 prize money, while the University for Development Studies, Ghana got $3,000 and the Tunis Business School, Tunisia, got $1,000.

The Accra outing was the first Peer-to-Peer Challenging Extremism competition to be organized in Africa 17-years after the program kicked was initiated.

Facebook, Edventure Partners, and officials of the United States Department, co-sponsors of the competition, commended the AUN’s #IAmABeliever campaign.

The judges described the campaign as “extraordinarily coherent.”

Giving insight to the competition, Faculty Adviser who led the AUN team to Ghana, Jacob Jacob said, “Our students worked extremely hard and their presentation was very coherent.

“Winning this competition shows our expertise within a region that is extremely important and on a very important topic.”

Mr. Jacob, who is also the interim associate dean of the School of Arts and Sciences and chair of the Communications and Multimedia program, said many governmental and non-governmental organizations have expressed interest in the campaign.

“I can’t see a better key to countering violent extremism, which has to be led by young people and delivered peer to peer. It has to be backed by research and must be well targeted,” said Mr. Jacob.

The campaign revolved around the concept, “I am a Believer, but I am also human, a brother, a sister, an artisan, a father, a mother, and a student.”

It sought respect for everyone’s beliefs while emphasizing interdependence, interrelatedness, shared beliefs and values, and a common sense of humanity.

As part of the campaign, the AUN team created “Beliepedia,” a digital tool which showcased Christian and Islamic teachings and scriptural texts on some challenging questions.

Such questions include: What is the purpose of life? Why does God permit suffering?

It also enables Christian and Muslim leaders and clerics to provide answers to questions raised.

Apart from Beliepedia, the students created videos and social media posts, as well as hosted a stories-for-peace workshop in Mubi Local Government Area of Adamawa State.

The workshop brought Muslims and Christian groups together to share stories of their escape when Boko Haram invaded the town in 2014 and helped heal wounds.

The Challenging Extremism competition empowered students around the world to develop and execute campaigns and media strategies for their peers.

The finalists of the Africa regional competition emerged through a series of contests involving the 32 participating universities from the continent.

A total of 286 universities worldwide are engaged in the contest.

As Africa’s representative, AUN will face off with winners from other continents in a final showdown in the United States later this year.