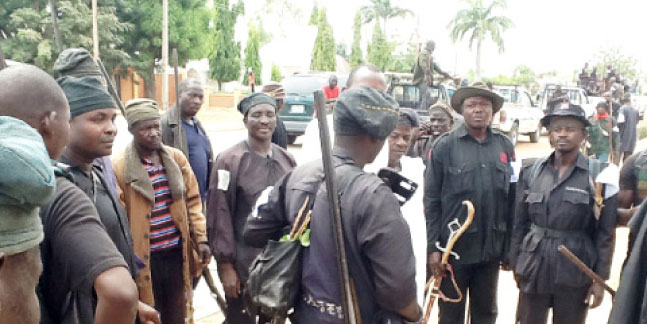 The chief security officer of the local hunters in Adamawa State, Garba Tarfa, told PREMIUM TIMES on Tuesday that the hostages were rescued last week.

Local hunters who rely on their deep knowledge of the environment and use of traditional charms believed to confer immunity from bullets and machete cuts had earlier sought permission to confront Boko Haram in Sambisa forest to rescue the Chibok schoolgirls.

The rescue of the eight hostages came barely a week after another group of 14, made up of women and girls, were rescued by local vigilantes during a fierce battle between the insurgents and Nigerian troops.

Locals resident in Madagali, an Adamawa Local Government close to Borno State, confirmed to PREMIUM TIMES that the latest escapees were helped by hunters to flee the insurgents’ camps.

The sources said the escapees and the hunters are currently in Yola, Adamawa State capital, to report to security operatives.

“Our men rescued them last week as they were fleeing the fierce battle between soldiers and Boko Haram insurgents in Sambisa”, Mr. Tarfa said.

“So we are now taking the five women and three children to concerned authorities for proper rehabilitation”, he said, adding “they told horrible stories of Sambisa.”

Mr. Tarfa recalled that hunters had rescued another group of 20 made up of women and children a few months ago.

He said the local hunters had also rescued about 287 hostages from the insurgents last year.

Efforts to speak with the spokesman of the 23rd Armoured Brigade on the latest development were not successful.

But the police spokesman in Adamawa, Othman Abubakar, confirmed the rescue.

“Yes we heard about the rescue by the hunters, but I am yet to get the details”, he said.

Sources however stated that the rescued women were asking to be reunited with their families.

One of the escapees whose name was given as Aisha Bello, a 23-year-old mother, was said to have revealed that she was abducted about two years ago.

How 6 Nigerian prisoners were killed during protest – Official