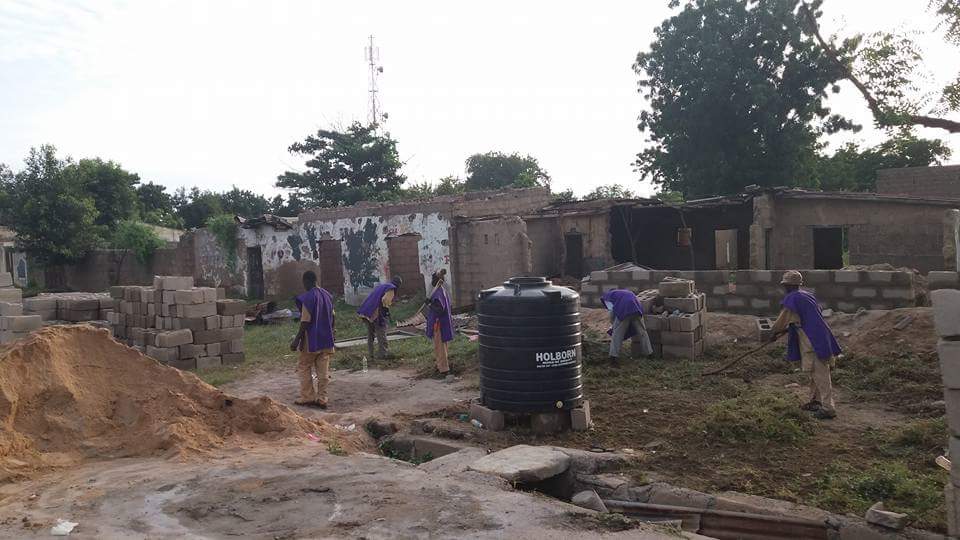 The Borno State government has commenced a massive fumigation of Bama, liberated from Boko Haram.

The operation started after Governor Kashim Shettima relocated there on Wednesday.

The state deployed some 1,000 personnel for the operations which kicked off on Saturday.

It will cover 17 major streets of the badly damaged city that hosted Boko Haram insurgents for nearly a year before the military liberated it early this year.

The Sole Administrator of Borno State Environmental Protection Agency (BOSEPA), Nassir Surundi, told journalists that so far 17 streets had been cleared of giant weeds that grew after residents fled Bama town in the wake of attacks by Boko Haram insurgents in September, 2014.

“We hope to clear 17 additional streets by tomorrow (Sunday) and I promise all of you that within the next two weeks Bama will wear a new look different from the bush and the debris you see around,” said Mr. Surundi.

“Without us clearing the roads, workers wouldn’t have access to reconstruction sites while the town will continue to look like a war zone. We are committed to Governor Kashim Shettima’s mission of changing Bama from what insurgency has turned it into,” he said.

He said funds for the cleaning and fumigation were covered in the 2016 budget allocation to the agency.

“We are encouraged by the presence of His Excellency, Governor Kashim Shettima in Bama; and we are bringing in more hands to Bama to speed up the work just like we did in clearing liberated towns of Dikwa, Magumeri, Konduga, some parts of Maiduguri Metropolitan Council,” he said.

On the safety of the personnel being ferried into Bama from Maiduguri to work in likely mine infested terrain, Mr. Surundi said his agency “is working with security agencies with specialty in clearing mines”.

Mr. Shettima who also went round the town to inspect the fumigation exercise, commended the dedication of the agency even as he reiterated his resolve to remain in the destroyed town in order to personally supervise reconstruction works.

I had a very successful UN outing — Buhari