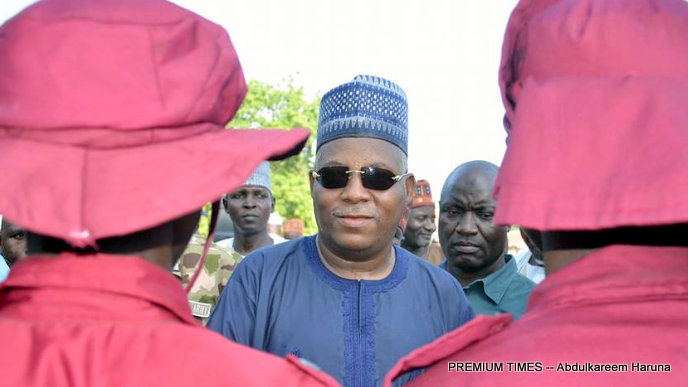 Mr Shettima and members of Vigilante Group of Nigeria

The Borno State Governor, Kashim Shettima, on Wednesday temporarily moved his office to Bama, a town badly destroyed by the Boko Haram.

The governor did that as part of commencement of the reconstruction of the liberated communities.

Mr. Shettima, who arrived Bama on Wednesday afternoon, said the destroyed city, the third largest in the state, would from Wednesday become the seat of Borno State government till he is done with his supervision of the reconstruction job.

“My office is now here”, Mr. Shettima said. “I decided to relocate here to live here and supervise reconstruction works. I will administer Borno State from here.

Though the governor was not specific about how long he intends to stay in the unsecured community around which Boko Haram attacks were recorded regularly, he indicated that he would not be returning to the state capital in the next few days.

“I am fully prepared to be here for days to come, one week, two weeks or even more.

“I will not leave until we are able to rebuild a good number of private houses, municipal buildings, markets, schools and clinics. I want the reconstruction work to take proper shape before I leave.

“We cannot wait till forever before we reclaim our destiny. Bama is one of the worst affected areas and we will move from here to other parts of the state.

“While I am here, we have a full structure of Government in place operating in Maiduguri so that activities of managing IDP’S, civil service, implementation of government policies and programmes will continue while I am here. I will be in constant touch with Maiduguri, I came prepared,” Mr. Shettima said.

Justifying the governor’s relocation to Bama, 74 kilometres from the state capital, his spokesperson, Isa Gusau, explained that “insurgents had attacked the town killing dozens, destroyed ‎more than 80 per cent of the thousands of houses in the town, sacked the Emir and took over his palace after declaring it as sovereign territory with set of laws and ‘constitutional’ leader.

“The military toppled the insurgents and recovered the area by the end of 2015, months after President Muhammadu Buhari took over affairs,” Mr. Gusau said.

“The Governor departed Maiduguri at about 12:10 p.m. and arrived Bama at about 2:18 p.m. and he went straight to supervising reconstruction works on private residential houses, police stations, stores, schools, hospitals, the Emirs palace among others.

“The Governor had deployed construction equipment and hundreds of trucks of variety of building materials which are already in Bama for the reconstruction works.”

The spokesperson said the governor did not embark on the trip to Bama without providing enough security to safe guard his life and that of those deployed to commence the reconstruction work in the ancient city.

According to Mr. Gusau, “the governor also commissioned 500 newly recruited civilian JTF and vigilantes employed from locals in Bama to use community intelligence in working with the military to strengthen security in the area so as to forestall unanticipated attacks”.

Briefing the governor upon arrival in Bama, the Commissioner for Reconstruction, Rehabilitation and Resettlement, Babagana Zulum, said the reconstruction activities have created nearly 1000 direct jobs beside stimulating the economy of the state through procurements of different building materials and payment for services.

The Commissioner said the governor was “bound to see new developments every day,” he goes out for inspection.

However, should Mr. Shettima’s resolve to stay in Bama for one or two weeks be followed to the latter, the road to Bama could be the busiest in the next few days as government officials who need his attention would have to visit him there.

Bama currently hosts over 20,000 internally displaced persons who are camped within the precinct of the town’s General Hospital under the direct care of military officials.

The city was first attacked on April 25, 2013 when about 17 persons were killed and Boko Haram insurgents burned down over 500 houses.

On May 7, 2013, the gunmen returned to the town and staged one of the biggest prison breaks during which inmates of the Bama minimum-security prison were freed. At least 14 prisons officials, 22 police officers, and two soldiers were killed in the shootout that left many of the insurgents dead as well.

On August 4, 2013 the insurgents returned to Bama where they attacked various security formations and civilian residential areas killing at least 33 persons.

On August 24, 2013, the insurgents attacked Bama during which they slaughtered three persons and injured 8 others.

On September 1, 2014, after other attacks, Bama finally fell under the control of Boko Haram as the insurgents dislodged the Emir and his subject from the city.

On Augusts 21, 2015 Boko Haram attempted to retake the liberated town of Bama, during which a soldier and 33 members of their group were killed.