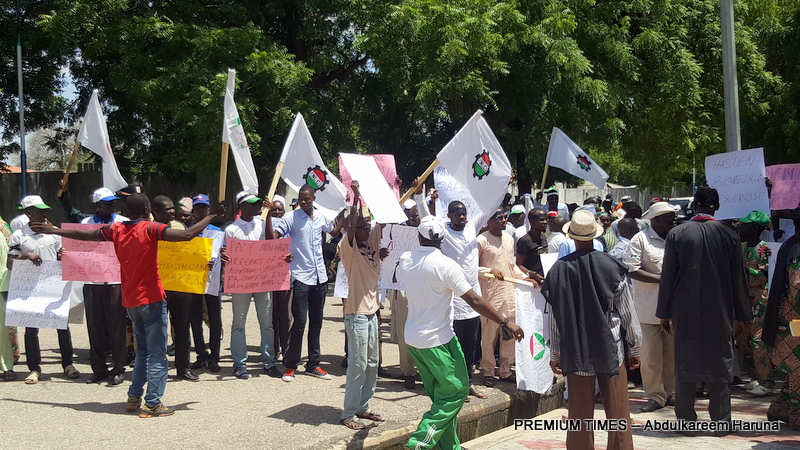 Workers in Borno State under the aegis of the Nigeria Labour Congress (NLC), on Tuesday staged a peaceful rally over the recent killing of two of their colleagues by the police during a similar protest session in Nasarawa State.

The Borno workers also used the opportunity to protest against the ongoing verification of workers in the state which has denied them their July salary.

They also wanted the Borno government to offset the backlog of primary school teachers’ allowances and other related demands.

“We are here on a sorrow mood of solidarity, protest, and mourning rally in connection with the killing of two workers in Nasarawa state by the police while the workers there were exercising theilr constitutional rights to peaceful protest,” said Mr. Abana.

The labour leader lamented what he described as the “emerging trend of police violence against workers and students while exercising their constitutional freedoms in some states”.

The unionists also bemoaned alleged plans by some state governments to reduce their workforce and office work days so that the two days off would be used in tilling farmlands of the state government.

“Labour is condemning in totality the plans of some state governments to half workers salary in the name of drop in statutory allocation to states from the federation account.

“Here in Borno State Labour is demanding payment of salaries while the ongoing verification exercise continues, so that workers are not subjected to hardship ranging from hunger, street begging and reduction of productivity in work places.

“In order for us to move the state forward, we are also demanding for the immediate settlement of all outstanding demands of Borno workers in the State, local government councils and that of the primary school teachers,” said the labour leader.

Responding, the deputy governor, Mr. Durkwa, said he stood in for the state governor, Kashim Shettima, who was out of the state.

He promised to relay their demands to his boss once he returns to the state. He however implored them to conduct themselves peacefully while the protest lasted.

How JAMB under my leadership will conduct students’ admissions – Oloyede

How JAMB under my leadership will conduct students’ admissions – Oloyede